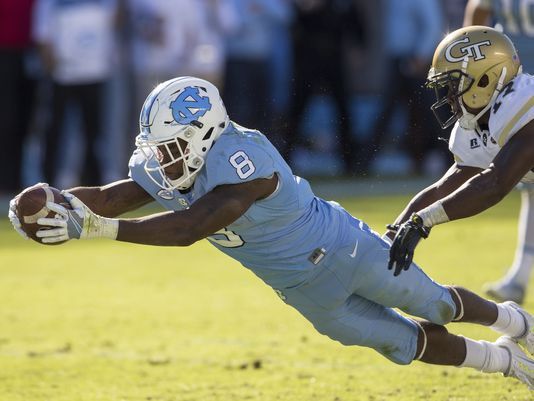 The Arizona Cardinals draft class continued to add depth and versatility as they wrapped up rounds 4-7 on Saturday. The offensive line and secondary were a priority, and they added some big name un-drafted free agents:

Johnson started 39 straight games for Pitt the past three years and has been rock-steady. But a recent discovery by teams of a liver condition, one Johnson said he has had his entire life, caused him to drop. He said it won’t be a concern, and Johnson will provide depth and flexibility to the offensive line, where left guard Mike Iupati is turning 30 this season, and second-year player Evan Boehm has been slated as the right guard.

Fifth Round
Will Holden, tackle, Vanderbilt

The Cardinals addressed the offensive line again in the fifth round, going after 6-foot-7 ½, 311-pound tackle Will Holden from Vanderbilt. Despite his size, Holden provides great flexibility and can help add depth to either left or right tackle over the next few years.

The North Carolina running back ran an impressive 4.37 40-yard dash at the NFL Combine. With Andre Ellington moving to the receiving corps, Logan can provide depth at the running back position, but his biggest contribution could be as a returner in the special teams unit. Logan ended his senior year with 675 rushing yards and found the end zone 12 times.

The Cardinals packaged two seventh-round picks to move up to the sixth and take Johnathan “Rudy” Ford from Auburn. The Arizona Cardinals draft has been all about versatility, and much like their first two picks – Haason Reddick and Budda Baker – Ford brings a lot of versatility to the Cardinals defense. He has experience playing running back, nickel corner and safety, and the Cardinals think he will be lined up at cornerback.

The Cardinals didn’t draft a quarterback but did sign one as an un-drafted free agent. Trevor Knight played for Oklahoma before transferring to Texas A&M and is a mobile quarterback who threw for 19 touchdowns and seven interceptions while rushing for 600 and 10 touchdowns.

Ricky Seals-Jones is a big-bodied target who is slated at 6-foot-5, 225 pounds and will play tight end at the next level. Seals-Jones was a five-star recruit and one of the most coveted high school players in the nation, but had a tough career at College Station while battling injuries.