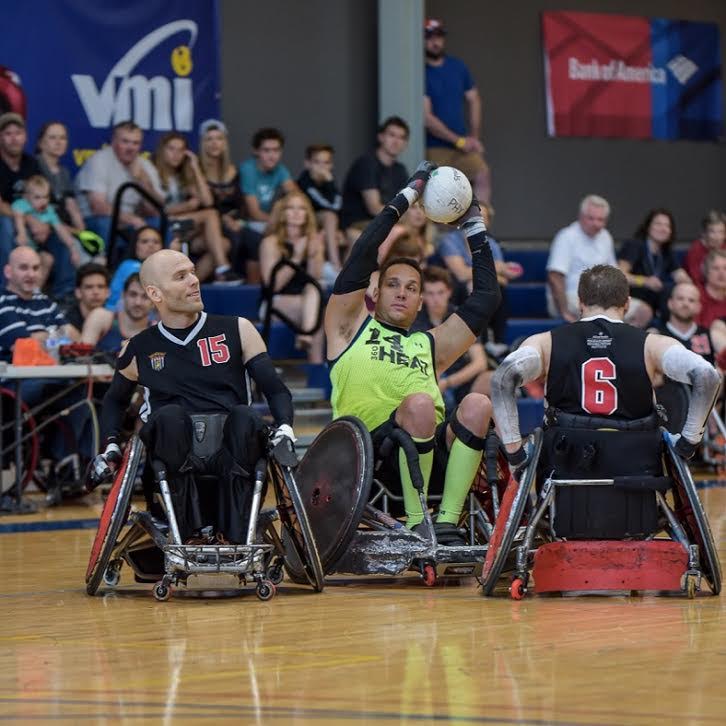 The 360 Phoenix Heat grabbed their third championship in the last four years with a 55-51 win over the Minnesota Steelheads at the 2017 National Wheelchair Rugby Championship on Monday, April 24th. The win wrapped up a perfect season for the Heat.

Undefeated seasons are nothing new to the 360 Heat. In 2014 their 33-0 record led them to a championship at the US National Tournament in Kentucky. Then in 2015, they proved their season was no fluke by returning to defend their title and repeated as champions.

I’m so proud of these guys! #2 in the nation wasnt our goal, but hardly anyone gave us a chance, and we nearly pulled it off. To the future! pic.twitter.com/9X3VKBB9vr

“We have a lot of good, dedicated players on our team,” 360 Phoenix Heat player-coach Scott Hogsett said in a release. “Their commitment is proven in the way they train.  We practice three days a week during the season.  They show up, work hard and know what they’re doing. And it showed in the championship game when we came out a bit sluggish.”

The neck-and-neck battle gave the sold out crowd all it could ask for with no more than two points separating the teams through most of the first three quarters.

“We were close to blowing it open several times, but we couldn’t get it done,” Hogsett said. “But we stuck to our game plan and managed the clock at the end of the third quarter to give us the last goal and we had possession of the ball going into the fourth.”

The event took place at Ability360 Sports & Fitness Center in downtown Phoenix. The 360 Heat had home court advantage, which put an added pressure on the team to come out with the victory.

“The hardest thing to do is to win a game you’re supposed to win,” Hogsett said.  “Playing at home is very hard, and when you’re favored, it creates a lot of undue pressure.  But we’ve got a great system and really smart players and when it comes to a championship game, training and conditioning are the key.“

Despite the pressure, the 360 Heat got the job done and look to return next season in October. Hogsett plans to focus his energy on coaching and let USA National Team key reserve, Joe Jackson, into the starting lineup.

“The tournament was awesome,” Hogsett said.  “It was better than I could have ever imaged.”