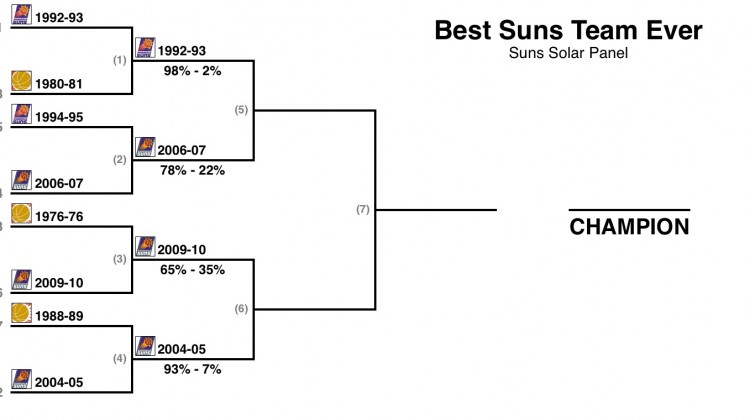 The 1992-93 Suns are the darlings of the desert thanks to Charles’ Barkley’s MVP performance and the team’s run to the NBA Finals. Oh, and they also finished the season at 62-20, the best mark in team history.

The 1980-81 Suns were nothing to scoff at either. They finished 57-25, first in the Pacific Division, and were the No. 1 seed in the Western Conference. In a bizarre season, they got a bye in the first round and were upset by the Kansas City Kings in the second round.

Thanks to the best offense in the NBA, the 2006-07 Suns led by Nash, Amare and the Matrix had the league’s best offense and the second best record in Suns history at 61-21. As the second seed in the playoffs they steamrolled the Kobe led Los Angeles Lakers but fell to the hated Spurs in Round 2.

The 1994-95 Suns might be the sleeper in this contest. Well, that depends if you’re saying they do or don’t have Danny Manning. With Manning the team was off to the best start in the league and on their way to setting a record for wins. After his knee injury they slowed down a bit finishing 59-23 and losing to the eventual champion Houston Rockets in seven games in the second round.

The 1975-76 Suns may not be impressive record wise at 42-40 but they were the “Little Team That Could” as Joe Gilmartin called them. Thanks to Rookie of the Year Alvan Adams and guard Paul Westphal they had an improbable run to the NBA Finals that saw them defeat the defending champion Golden State Warriors in the Western Conference Finals and almost dethrone the Boston Celtics. Oh, and the Sunderella Suns played the greatest game in NBA history. A triple-overtime loss in the Finals at the Boston Garden.

The 2009-10 Suns weren’t unlike their competition in this tournament. A team that was built on teamwork and chemistry that shocked in the playoffs. The difference was this version of the Suns led by Steve Nash, Amare Stoudemire and Grant Hill didn’t make the finals falling two games shy thanks to a Kobe airball and a Ron Artest putback.

The 2004-05 Suns tied the 1992-93 Suns for the best record in team history. Like their predecessor, they also had the league MVP on the roster. Steve Nash couldn’t do what Barkley did though as this Suns team fell one series short of the NBA Finals.

The 1988-89 Suns were like the Phoenix emerging from the ashes. After a drug scandal and the retirement of Alvan Adams, Phoenix was in search of a new identity and hope. It came in the form of Kevin Johnson, Tom Chambers, Jeff Hornacek and Eddie Johnson. Cotton Fitzsimmon’s team won 55 games and made a run in the playoffs. They fell just short of the finals losing to the Lakers in the Western Conference Finals (we’re sensing a trend here).