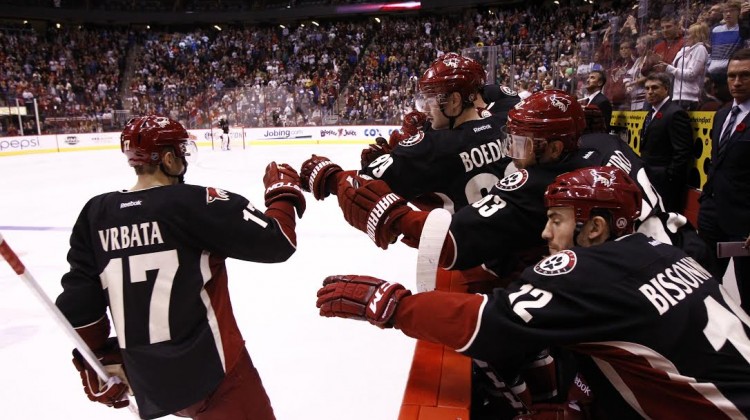 ‘Pack Mentality’ is a new column here on Sports360AZ.com to keep you up to date with what’s happening around the Arizona Coyotes. Here’s what you need to know coming into the Coyotes weekend at home.

Tuesday, NHL commissioner Gary Bettman threatened to move the Coyotes out of Arizona if the Legislature does not approve the Coyotes move to another part of the Valley. Bettman wrote a letter to the Legislature explaining that Glendale is not “economically capable of supporting a successful NHL franchise.” In the letter, Bettman explains that a move the greater Phoenix area or to the East valley would greatly benefit all parties involved and help the growth of the sport of hockey in the state. Bettman has not completely ruled out Arizona as the home of the Coyotes, but he said “The simple truth? The Arizona Coyotes must have a new arena location to succeed. The Coyotes cannot and will not remain in Glendale.”

Forward Radim Vrbata skated his 1000th NHL game on Thursday against the Ottawa Senators. Vrbata is the 308th NHL player and only the 12th player in the franchise to reach the milestone. In 494 games with the Coyotes, Vrbata has 152 goals and 184 assists. The forward currently leads the Yotes with 48 points in 65 games this seasonk, putting him at 11th for points on the franchise scoring lists.

“I played half of my career here and this is where I’ve had the most success,” Vrbata said prior to Thursday’s game. “I’m glad how it worked out and (that) I get to play this game in front of Coyotes fans.”

After goals by rookies Brendan Perlini and Lawson Crouse on Thursday, Coyotes’ rookies have now scored 80 points this season placing them at the fourth highest total points by rookies in the NHL.

Stop us if you've heard this before: A #Yotes rookie scored a goal.Nice one, @LawCrouse! pic.twitter.com/mKGbP9cozV

Christian Dvorak has now won a season total of 329 face-offs, passing Krys Kolanos’ 326 FOW’s in the 2001-2002 season for third most by a rookie in franchise history.

Duclair Back in the Valley

Last Wednesday, the Coyotes recalled forward Anthony Duclair from AHL affiliate Tucson Roadrunners. Duclair was sent down to Tucson on Jan. 19 with hopes of the forward regaining his scoring touch. In 16 games with the Roadrunners, Duclair had one goal with seven assists. Duclair appeared in his first NHL game since Jan. 18 on Friday against the Carolina Hurricanes.

“It’s good to be back and see the guys again and get reintegrated in the lineup,” Duclair said. “It’s been a tough stretch this past month or so, but (I’m) just happy to be back and get things rolling here.”