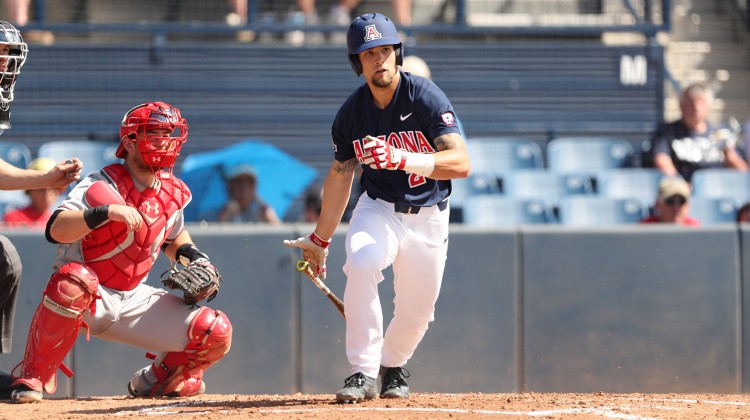 Pac-12 baseball is back in action. Here on Sports360AZ.com, Pac-12 at the Plate is the place to keep up with how ASU and Arizona baseball are stacking up in the conference. This week No. 9 Arizona is at No. 1 Oregon State for a top 10 matchup and ASU is in Los Angeles to take on USC. Here’s what you need to know about last weekend’s opening conference series and what to watch for this weekend:

Series of the Weekend

All eyes are on Arizona’s matchup with Oregon State this weekend. The Beavers enter the weekend with a 1.06 ERA, the lowest in the country, while the Wildcats have the highest batting average at .352.

Arizona also leads the country with a .441 on-base percentage, 2.95 doubles on the season and in scoring with 10.2 runs per game.

On the bump Friday will be Oregon State’s Luke Heimlich and Arizona’s JC Cloney. Heimlich is fourth in the nation with a .250 ERA. Cloney has a 1.13 ERA and has 25 strikeouts, five walks in 32 innings pitched this season.

Our #MatchupOfTheWeek is a Top ? showdown featuring two Pac-12 powerhouses.

OSU sophomore infielder Nick Madrigal will be Arizona’s biggest threat at the plate. Madrigal is batting at .426 in 18 games with three homers and five doubles. He was named to Team USA’s Collegiate National Team this past week.

Offensively for the Wildcats, juniors Jared Oliva and JJ Matijevic are tied for the most doubles nationally with 12 a piece. Oliva is hitting at .392, Matijevic at .386. Freshman infielder Nick Quintana is another guy to watch on offense for Arizona. Quintana has two home runs on the season with 20 RBIs and 23 runs scored.

Oregon State’s pitching will be the biggest obstacle for Arizona, as it has been for many other teams so far this season.

ASU closed out the 2016 regular season with a 31-9 loss to USC, something they’re definitely going to look to avenge this weekend.

For the Sun Devils, keep an eye on freshman Lyle Lin and junior outfielder Andrew Shaps at the plate. Lin currently leads the team with .407 batting average and has multiple hits in nine games so far this season. Shaps has reached base in 13 of his 14 appearances. Oregon State shut down his 10-game hit streak, but expect the junior to bounce back this weekend against the Trojans.

Junior left-handed pitcher Eli Lingos will get the start on the mound for ASU on Friday. Lingos has a 2.43 ERA and suffered his first loss of the season against the Beavers last Friday. The lefty has been pretty consistent this spring and will look to continue to keep things rolling against the Trojans.

In the pen for ASU, keep an eye on sophomore lefty Connor Higgins and freshman lefty Chaz Montoya. Both are guys head coach Tracy Smith has liked with what he’s seen so far this season.

The Trojans, who have their youngest team since head coach Dan Hobbs took the helm in 2013, boast a young pitching staff like the Sun Devils. Freshman right-hander Chris Clarke will get the start on Friday. Clarke has a 3.47 ERA and is 2-0 on the season. Freshman reliever Austin Manning has three saves this year and is 1-1 on the season.

The Trojans have the top fielding percentage in the country right now at .985, which will be a test for the Sun Devils.

Washington @ Oregon: Washington swept Utah last weekend, while Oregon took the series against Cal. The Ducks have a 2.53 ERA, eighth best in the country. The Huskies will look to challenge Oregon’s pitching staff with big hitters like junior catcher Joey Morgan and senior outfielder Jack Meggs.

Utah @ Stanford: Stanford is back in action this weekend after taking last week off for exams. Last weekend, defending Pac-12 champion Utah was swept by Washington. Friday’s opener has been postponed due to rain. The two will play a doubleheader at Sunken Diamond on Saturday.

Cal @ UCLA: Both of these teams dropped their conference openers last weekend 1-2. Cal will look to bounce back after struggling to keep things going offensively against Oregon. Andrew Vaughn is a Golden Bear to keep an eye on. The freshman infielder has four home runs and 12 RBIs. For UCLA, Friday starter Griffin Canning has been the go-to guy on the bump for the Bruins. Canning has a 1.89 ERA and 43 strikeouts so far this season.