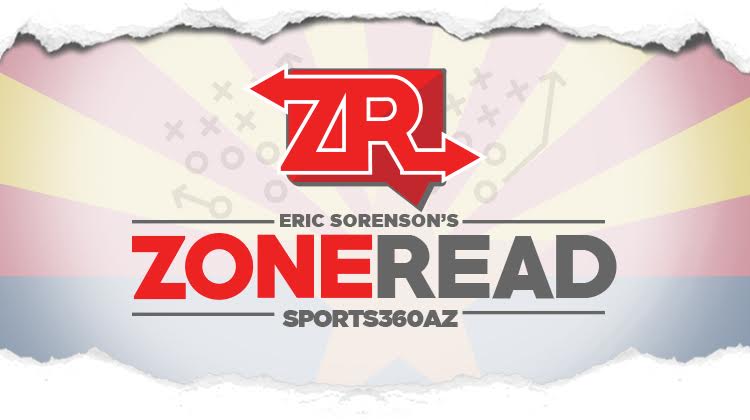 We are just a few weeks away from spring football getting started around the state and I know there’s one school that’s pretty excited to see a familiar face back on campus, so without any further ado, here’s this week’s edition of “Zone Read.”

‘Yote of Note…Centennial star running back Zidane Thomas has returned to Arizona after it was announced he was moving back to Miami to be closer to his mom. It’s not uncommon for a star athlete to move into Arizona and we’ve even seen some, most recently former Saguaro offensive lineman Kayden Lyles, move out-of-state. However, it’s not as common to see a player move here, move away and eventually come back as was the case with the junior workhorse Thomas.

Waiting for next season pic.twitter.com/oL1oYhcCkQ

Richard Taylor’s blue-collar team would have been fine without him but it’s scary to think the type of numbers the 5-foot-10, 205-pound wrecking ball is going to put up behind a stout offensive line anchored by Trevor Renfro and steady quarterback Ruben Beltran III who completed over 65% of his throws and threw only five interceptions in 2016. Don’t be surprised if Thomas eclipses 2,000 yards this fall.

Getting Edgy…Another player I expect to have a monster senior season is Hamilton’s Brayden Flynn who has been busy this off-season bulking up after being a frequent visitor in opposing backfields last year.

“What makes Brayden special is his quickness off the ball,” Husky head coach Steve Belles said to Sports360AZ.com. “He will have to work on his lifting in the weight room.”

After 14.5 sacks last season, expect another big year from the defensive end/outside linebacker, especially considering the added upper body strength, combined with his speed off the edge. The 6-foot-3, 220-pounder has excellent technique and uses his hands well in pass-rush situations.

Yep, that’s the 185-pound Jenkins benching 315 last month. It’s easy to see why the state of Arizona is producing such high-level talent when players like Jenkins and Flynn understand the process and work required to take “the next step” in off-season training and conditioning.

“I think Ja’Tai will have another fantastic season,” Vipers’ head coach Derek Wahlstrom said to Sports360AZ.com. “The guys up front are working diligently to get bigger, faster, stronger so they can create holes for him. The Verrado weight program has proven to pay big dividends to former players moving to the next level.

Walhstrom and his staff are building something special in the far west Valley. Don’t believe me?

A Big Deal…Sports360AZ.com Recruiting Expert Jason Jewell believes the strength of the 2018 next-level recruits will be up front. Deer Valley’s Joey Ramos is piling up the offers and last week I spotlighted the best Tucson prospect.

“The depth of this class [is impressive],” Jewell said. “There are a lot of kids who have a chance to play at a higher level.”

Spent a bunch of time watching film today. I like the talent along the OL in Arizona in the 2018 class.

A few other 2018 offensive linemen with big futures include Desert Edge’s Max Wilhite and Austin Young, Horizon’s Isaiah Mursalat and Safford’s mammoth Ralph Frias who I first saw as a sophomore.

While the o-line class grows, you’re seeing a decrease in big-time play-making defensive lineman and linebackers which isn’t surprising as more coaches are going to three-man fronts and dropping more players in coverage due to the emergence of spread offenses.

Golden Gopher…Quietly quarterback Jared Wood racked up some impressive numbers last season for 10-3 Florence. In watching his tape, it’s clear the 6-foot-3, 195-pounder has the ability to push the ball downfield and expose an over-committing defense in process.

“We pride our quarterbacks in getting the ball out in 2.8 seconds or less,” head coach Scott Howard told Sports360AZ.com. “Jared has learned to get the ball [out] faster than that most of the time. He has learned to throw his wide receivers open. He demands excellence from his teammates.”

Congrats to Florence Qb Jared Wood for being invited to @UW_Football for a visit. Proud of our Gopher! pic.twitter.com/YlMzwq2YiO

Standing On the Corner of Winslow, Arizona…You may find the next diamond in the rough on the high school scene. My friend Ralph Amsden from Arizona Varsity brought to my attention the play of Winslow High freshman Yoann Djassa who had eight touchdowns (five receiving, two rushing, interception return) for the Bulldogs.

He also averages eight points a game for the 26-9 basketball team who plays Ganado in the 3A Final Four Friday night at Gila River Arena in Glendale.

I mentioned he’s a freshman, right?

Brad Cesmat ·
@bradcesmat
Interesting view from @wilnerhotline on a basketball-only school in the mix. Pac-12 Survivor Guide: Expansion options from Spokane to Dallas - https://t.co/0q12ukm5QT via @sports360az
View on Twitter
4
15