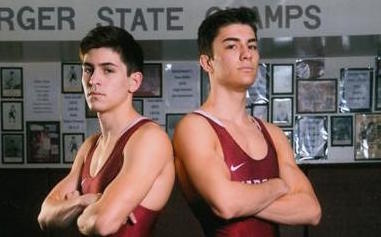 Special to Sports360az.com by Greg Macafee

Great things come in pairs and for McClintock High School, its great thing came in a pair of fraternal twins and four state championships.

Two years ago, Marco and Gator Groves set an Arizona state record by becoming the first set of twins to win a state title in the same year. In their sophomore seasons, they defied history and did it once again.

This year, the brothers have come back even stronger as they both chase a third-straight state championship. Both of have gone undefeated in 2017, racking up 97 victories and a pair of sectional championships between them. This weekend, they both enter the Division II state championship in Prescott Valley as top seeds, where they look to make history once again.

A third state championship is on the horizon for both but they continue to keep their minds on the matches in front of them. This is something that their father and coach, Robert Groves, has instilled in them from a young age.

The mindset has proven to be successful. Continuing from last year, Marco, who wrestles at 160 pounds, has won a total of 137 straight matches and earned his sectional championship this year with two pins and a decision last weekend. Gator, who competes at 145, finished his junior campaign with 49 straight victories, including two pins and two decisions to take home the Division II Section IV championship last weekend.

“I like to take it one match at a time so I started really focusing on state only when I won sectionals,” Gator said. “This week I have been focusing on getting prepared for state, There is a lot of pressure on me to win a third state title but I try to not let the nerves get to me.”

The two brothers have been side by side since they started wrestling when they were little kids. When they were younger they even avoided wrestling in the same weight division in order not to meet in the finals. Being able to see the other brother succeed has only provided an extra sense of motivation for the twins.

“I feel like we look towards the bigger picture in which both of us wish, with all of our hearts, the other is able to wrestle to their full potential,” Marco said. “In all honesty, I wish to see my brother succeed just as much (if not more) than myself.”

For the past two years, Marco has watched his brother win a state championship before going on to win one himself. Gator has returned the favor, holding off on celebration until his brothers’ hand was raised in victory.

This weekend at the Prescott Valley Event Center they hope to do it for a third time.