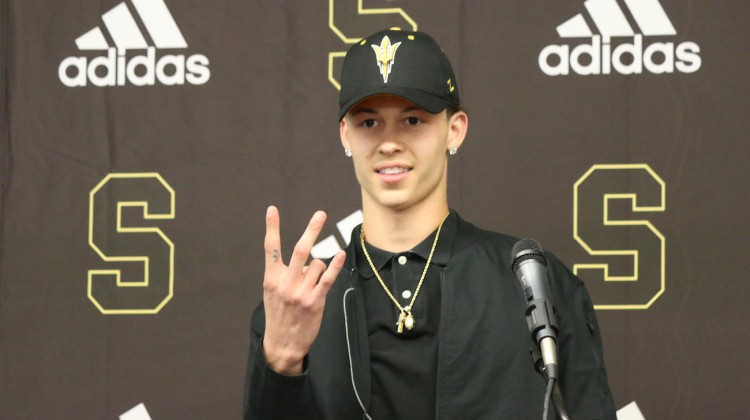 In 2016 the Sun Devils had the worst pass defense in the country. Hoping to get things turned around, ASU’s focus for the 2017 class was in the secondary.

“All five of these guys are guys that I really think will have an opportunity to play for us next year,” Graham said. “We’re really excited about these defensive backs.”

“Evan is a guy that can play multiple positions in our defensive backfield,” Graham said. “He was probably one of the most dynamic players that we watched.”

A four-star recruit out of Oklahoma, Evan Fields is the “headliner” for this year’s group of DB recruits, Graham said.

“(He’s) a guy that can cover, a guy that has a great physicality,” Graham said. “He can play up around the line of scrimmage as well as play bump and run coverage man.”

Local product KJ Jarrell out of Saguaro is another of ASU’s four-star DB recruits. He’s a guy that Graham expects to make an impact right away for the Sun Devils.

“KJ is a guy that we project as being one of our three safety positions,” Graham said. “He has great versatility. He can cover. He’s got great physicality and great speed.”

Jarrell was ranked as the number one safety in Arizona by ESPN and was one of four Arizona players at the Army All-American game in San Antonio.

“Ty’s a guy that I just fell in love with watching his film,” Graham said. “He’s a guy that plays the game the way it should be played.”

He's got football in his blood. And he's going to bring the boom.

Thomas’s talent reminds Graham of another defensive force who played for the Sun Devils.

“He reminds me a lot of Jordan Simone, that type of player, a great special teams player.”

Alex Perry from Bishop Gorman High School, is another four-star defensive back who Graham said will fulfill a need for the Sun Devils at cornerback.

Officially a Sun Devil…. I plan on taking my championship mentality and spreading it to my teammates… #ForksUp #CBA , THANKQ pic.twitter.com/CgfAzAUrnQ

Perry is the brother of ASU redshirt senior defensive back Armand Perry.

“Langston’s a guy (that’s) probably one of the most underrated guys in our class,” Graham said.

A product out of Graham’s home state of Texas, Fredrick was a late addition who was recruited by new defensive coordinator Phil Bennett, Graham said.

“(He’s) a great tackler,” Graham said. “He can play multiple positions, but he’ll play corner for us.”

With a third of the Sun Devils’ secondary in this year’s class, Graham expects all five commits to compete right away.

“I think the talent level that those guys are at, they’ll be in the two-deep competing to play,” Graham said.