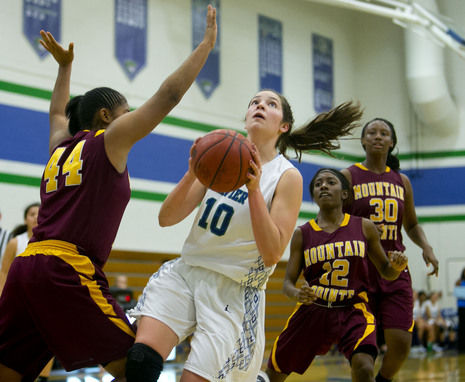 With the women’s high school basketball state tournament beginning this week, many teams are gearing up to try to make a run at a state title.

One of those is Xavier College Preparatory (20-6), a Top 10 team with big goals this month. Head coach Stephen Moss-Kelley recently told Sports360AZ.com the biggest focus for the team is not beating themselves with unforced errors in the single-elimination tournament. “We’ve got to limit our turnovers and convert when it’s time to convert.”

Coming off a recent 84-69 win over central Phoenix neighboring rival St. Mary’s, Moss-Kelley says the teams strength on defense is their guard play. “Our point guard and two guard are probably the most athletic in the state,” Moss-Kelly said.

When it comes to offense, strong post play has been the driving force behind XCP’s success. “We have two post players that can score with their back to the basket,” Moss-Kelley emphasized. “That’s big in high school. You’re lucky if you have one, we’ve got two, so that’s an advantage for us.”

Xavier walked away with a hard-fought 47-44 victory over the Pride when these two played earlier in the season. Despite that, coach Moss-Kelley feels that adjustments to the game plan must be made. “The most difficult thing you can do is beat someone twice,” Moss-Kelley said. “Obviously they’re going to be better, and we are going to be better, so it’s almost like playing a whole different team.”

With home court advantage, Xavier Prep heads into the first round with poise behind strong play and coaching.