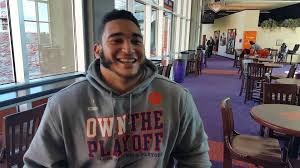 Defensive tackle Scott Pagano, a graduate transfer from Clemson, is on the radar for Arizona State. According to two recruiting sources in South Carolina, Pagano, a former four star recruit from Hawaii, received his release from Tigers head coach Dabo Sweeney who commented on Paganos departure,”He indicated to me that he wants to start his graduate degree and play his final year of college football, probably on the West Coast, I wish him nothing but the best.
Pagano had 93 tackles, including 8 for loss during his career with Clemson.

24/7 Sports reported on Saturday that there were over 30 schools, including Arizona State that have checked into Pagano since the news broke on Friday that he was leaving Clemson.
http://clemson.247sports.com/Bolt/Mega-interest-already-in-Pagano–51355649