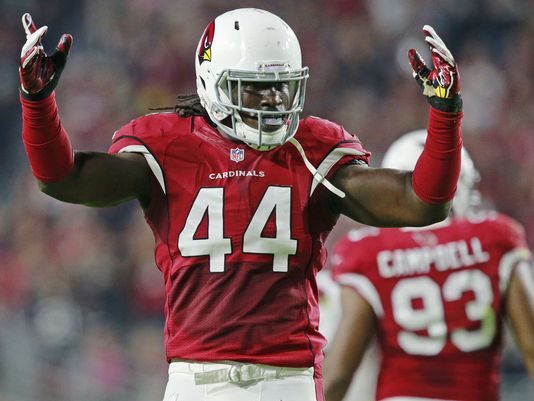 The Arizona Cardinals wrapped up their disappointing 2016 season on a two-game win-streak destroying the Los Angeles Rams 44-6 in southern California. With the win the Cards finish their playoff-less year 7-8-1, while the Rams drop to 4-12 and just 1-7 in their inaugural season back in LA.

1. New Year’s Day Scare…David Johnson’s dream season nearly came to a nightmarish end when he took a pitch in the first quarter and was swarmed under by a host of Rams. In the pile up his left knee was twisted bent backwards. Johnson was helped off the field and carted to the locker room a few minutes later. There is no “official” word on the severity of Johnson’s injury but he did return to watch the second half in sweats from the sideline. ESPN insider Adam Schefter tweeted meniscus damage but his ACL still fully intact. According to Schefter an MRI is scheduled for Monday.

2. Will Fitz Call It Quits?…Only time will tell but Sunday 33-year-old Larry Fitzgerald reached yet another milestone notching his eighth 1000-yard season, best in franchise history. His five-yard touchdown in the fourth quarter was his first since Week 5 and also gave him an NFL-best 107 receptions on the year. To put it bluntly, Fitz owns the Rams. He has 17 career touchdowns against the St. Louis/Los Angeles franchise.

3. Still Golden…What won’t be lost or forgotten in this underwhelming season will be the exceptional play of second-year outside linebacker Markus Golden who again was a regular in an opponents’ backfield registering three sacks of rookie quarterback Jared Goff Sunday. The St. Louis native finished with 13 sacks, over tripling his rookie season totals (four). Golden has certainly benefitted from having Chandler Jones (also double-digit sacks) on the other side. Both helped Arizona finish at the top of the league in said category with 47. Golden’s 13 are the most in one season since Bertrand Berry’s 14.5 back in 2004. Arizona finished 20th in sacks last year.

4. Gurley Man?…Rams’ running back Todd Gurley’s brutal season ended with a pedestrian 14-carry, 40-yard finale. Gurley’s ineffectiveness coincided with Los Angeles finishing dead-last in the NFL in total offense. He rushed for 187 yards in two games against the Cards as a rookie last season when he finished with over 1,100 yards and 10 touchdowns.

5. (Off)-Season of Change…After ringing in 2017 with a win, the annual NFL-revolving door of coaches and players coming/going starts. Obviously, Fitzgerald’s future will be the most discussed but Arizona has over 20 free agents, including long-time Card Calais Campbell who finished the season strong. Campbell wants to come back but will the price be right for both parties? It is believed Arizona would like to also bring back safety Tony Jefferson who had a phenomenal season, as well as tight end Jermaine Gresham.