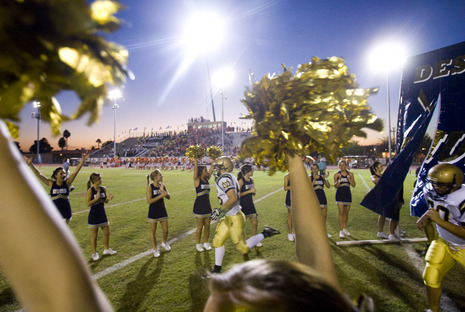 We’re two weeks away from 2017 National Letter of Intent Day but there’s still plenty of other things which caught my eye from around the state on the high school football front so let’s get to it.

Please, Stop…Speaking of LOI Day, can everyone put down their phone, tablet or whatever electronic device before hitting send on that reply tweet or social media post regarding prospective recruits. I promise I’m not trying to scold you with a ruler but the pressures these teenagers face from coaches, friends, teammates, recruiting experts, even parents is overwhelming enough.

Even if said recruit didn’t commit or doesn’t sign with your “college of choice” let’s respect them and their decisions. These hard-working student athletes, whatever they decide, need to be celebrated and rewarded, not chastised from outsiders who, more often than not, have no connection to the player or their family.

Please, let them have their moment for the next two weeks. They deserve it and they only get to experience this once.

It’s been a good year for the state of Arizona. Don’t believe me?

Titan Up…While nearly all of the coaching vacancies have been filled, Arcadia is still searching for their new leader after the school parted ways with Lenny Abt following a 2-8 season. The school received dozens of resumes but appear to be narrowing their search. I’m hearing former Cesar Chavez head man Jim Rattay, former Campo Verde assistant Curt LeBlanc and Phoenix Christian’s Adam Olson have all interviewed. Olson is an intriguing prospect. He flipped a 3-7 team two years ago into a 10-2 2A state quarterfinalist before falling to eventual champion Thatcher.

Whoever gets the job will tasked with making a connection in the Arcadia community and keeping their talent pool away from Brophy and other options in the vicinity. Don’t be surprised to see a resurgence in numbers within the district. Unlike some schools in the Valley, Arcadia certainly has the resources and backing for sustained, long-term success if they find the right fit to not only bond the program but the Arcadia pipeline, as well.

Thunder On The Horizon…Desert Vista is no stranger to excellent tight ends. The Miller brothers, Brent and Zach, torched high school defenses in the early 2000’s before taking their talents to Arizona State. Next in line for the Thunder may well be 6-foot-5, 230-pound James Stagg. The two-way standout has the size, frame and toughness as a former hockey to make an impact at the next level.

The captain averaged over 15 yards per reception last season and caught three touchdowns. Defensively, he led DV in quarterback hurries (11) and fumbles recovered (three), while ranking second in sacks (5.5) and tackles for loss (four).

Meanwhile, Down the Street…Another name to follow in Ahwatukee is Mountain Pointe’s massive freshman offensive lineman DeAndre Henry. Already 6-foot-5, 235 pounds Henry is improving his footwork playing on the Pride’s JV basketball team this winter. Sounds like another mauler up front for Norris Vaughan.

Thanks to @donnieyantis for taking the time to come out and talk with me on Friday!! I appreciate the opportunity. #ForksUp