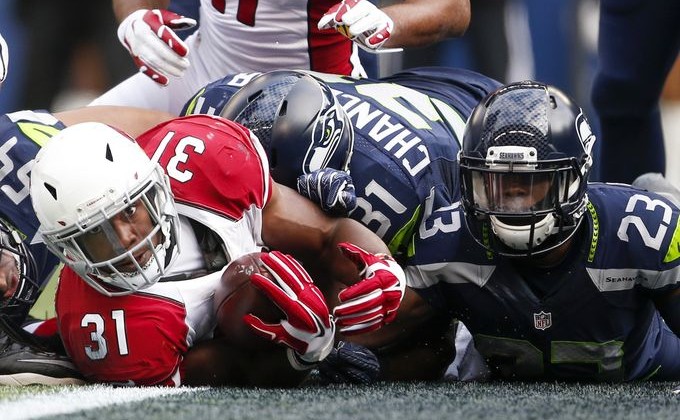 The Cardinals were up 13 with less than three minutes to play at Seattle on Sunday. The Seahawks would rally all the way back to tie the game, only to miss an extra point. A 31-31 tie in the final moments, and Cardinal kicker Chandler Catanzaro would boot a 43 yard field goal with the clock running out to give his team the victory. The win was the third time that the Cardinals have won at Seattle in the last four meetings. In an otherwise brutal season, the victory was impressive on many levels. Most notably, how hard the team played even though they’ve been eliminated from the postseason. Most everyone expected Seattle to roll over Arizona leading up to this game. A real testament to head coach Bruce Arians and his staff. Here’s a few more observations…

He scored three more touchdowns Saturday, to give him 20 on the season and 33 in 31 career games. Johnson is the first player since Randy Moss in 2008 to have 8 multi-touchdowns in a season. This would also be his third career 3 touchdown game. The Cardinals offensive line deserves a ton of credit for pushing around the Seattle defense most of the afternoon. He also became the first player in franchise history to surpass 2,000 total yards in a season.

For the second game in a row, Calais Campbell came away with a turnover, recovering a fumble in the first half. The defense was able to get pressure in the first half, sacking Seattle quarterback Russell Wilson 5 times. The effort of the Cardinals was very good outside of Doug Baldwins showing. The Cardinals tossed Wilson in the fourth quarter including a 4th down stand with 6-mins. to go in the game. The Cardinals defense would finish with 6 sacks.

Yes, Seattle rallied late, but the NFC West Champions didn’t have their way against the Cardinals for most of the afternoon.

Alex Okafor had a blocked punt and Catanzaro kicked the game winner without he benefit of timeout to set up for the final play. Special teams have been the main downfall for the Cardinals this season, but Saturday, give credit to where credit is due. It wasn’t perfect all the way around, but the game winning kick makes this part of the team a positive.

The Cardinals finish up the 2016 season, playing on New Years Day at LA against the Rams.