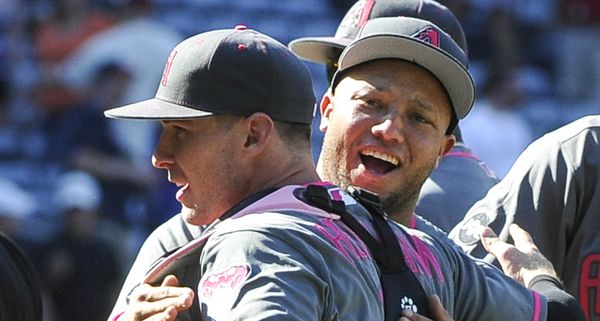 In 2015, the Arizona Diamondbacks had plenty of production out of the catcher position. Between Welington Castillo, who hit .264, 14 home runs and 68 RBIs and Chris Hermann, who, when healthy, earned the nickname “Babe” Hermann for his pop, the club had plenty of pop behind the plate.

Last week, the position took a dramatic shift when the Diamondbacks non-tendered Castillo, making him a free agent, along with pitcher Rubby De La Rosa. Diamondbacks general manager Mike Hazen said the moves were made to provide financial flexibility to pursue other free agents in areas of need.

So, where does that leave the Diamondbacks? They have signed Jeff Mathis, pending a physical, who hit an underwhelming .238 with two home runs and 15 RBIs in 2015. Mathis’ value comes defensively, not only is he an above average catcher defensively, but he also frames pitches incredibly well, something ESPN’s Mark Simon goes into great detail here:

On why a signing of a backup catcher with an MLB-low OPS is a big deal for the Diamondbacks https://t.co/YvDpxCkgfF

So they have the defensive specialist, but can Hermann supply the pop from behind the plate for an entire year? Last year was Hermann’s first year of substantial playing time, though he missed a good chunk of the season to injury. In that time, he hit .284, 71 points higher than his previous career-high in 2013 with Minnesota.

In short, the Diamondbacks seem to think he can be “the guy” behind the plate and in the outfield.

But, they may not be done.

Hazen told reporters at winter meetings the club could add another catcher to platoon 50-60 games. Hermann’s versatility to play the outfield would create the flexibility to carry three catchers on the roster.

Adding a healthy Hermann, as well as A.J. Pollock and David Peralta could add some punch to 2017’s lineup.