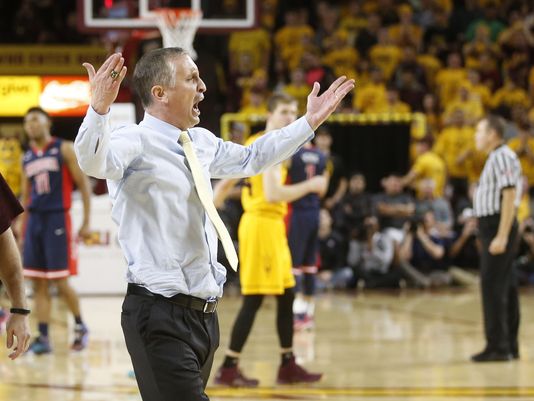 Bobby Hurley is trying to do what so many have failed to do before him: consistently win in Tempe.

Arizona State basketball’s mediocre state in the Pac-10/12 has become the norm over most of the past two decades. Sure, Bill Frieder had some success, as did Rob Evans and more recently Herb Sendek but each one’s tenure concluded with a frustrated fan base wanting more wins, NCAA tournament appearances and year-to-year consistency.

ASU Vice President Ray Anderson tabbed Hurley hoping he could be the one to elevate the program. As the Sun Devils (7-6) open conference play Friday night against Stanford the verdict on Hurley, in his second season, is still incomplete.

One analyst says Hurley’s sample size is still too small as he’s trying to build the program and its image his way.

“He’s trying to instill a passion and an energy in his team,” Pac-12 Network Analyst Matt Muehlebach told Sports360AZ.com’s Brad Cesmat in a recent phone interview. “He’s not settling for less. To me, I love all that.”

Despite losing top recruit Sam Cuncliffe who left the program a few weeks ago, Muehlebach believes Hurley’s blunt, honest transparency will win in the long run with recruits as he continues to overhaul pieces of the roster left over from the end of Sendek’s era. ASU severely lacks size and depth, two big issues moving forward this season.

“You just can’t coach around that,” the former Arizona guard who played against Hurley at Duke said, “Until that happens, it still won’t come together.”

While Hurley’s first season-plus has seen plenty of bumps and growing pains, the Muehlebach believes the future is bright for Sun Devil hoops.

“I loved the hire,” he explained. “He was an iconic college player. I think if you were an ASU fan that’s exactly what you wanted.”

Hurley is trying to flip the script.

At this point only time will tell if he can achieve where others before him have failed.