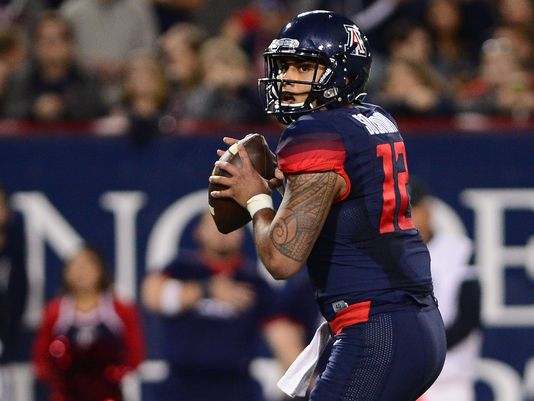 Quarterback Anu Solomon parted ways Tuesday with the University of Arizona announcing he will be transferring after four years in Tucson.

The redshirt junior is coming off an injury-filled season where he threw for 462 yards with just one touchdown and two interceptions. He fell behind rising junior-to-be Brandon Dawkins on the depth chart. The ‘Cats also have duel-threat sophomore-to-be quarterback Khalil Tate and incoming freshmen Braxton Burmeister and Rich Rodriguez’s son, Rhett among their QB stable.

“Through much adversity, I will never forget those who supported me, stuck by me, and believed in me; God, my family, my girlfriend, and close friends,” Solomon wrote. “From highs and lows, and the unlucky injuries I suffered from the past 2 seasons, I am blessed to have a fresh start at another program to finish out my senior year. Thank you Tucson, & GOD BLESS!”

The Hawaii native ranks fourth on the Wildcats’ all-time passing list with 6,922 yards. His 49 passing touchdowns is good for third behind Nick Foles and Willie Tuitama who both threw 67.

Solomon will long be remembered for his incredible redshirt freshman season in 2014 as he led the ‘Cats to a Pac-12 South Championship and birth in the Fiesta Bowl. He became the first freshman ever to start a season-opener for UofA. Playing in all 14 games, he amassed over 4,000 total yards and 30 combined touchdowns.

He is expected to graduate in the spring and will likely be graduate transfer-eligible, allowing him to play immediately at another school next fall.

There is speculation Solomon could transfer to UNLV where his high school coach Tony Sanchez is trying to rebuild the Rebels’ program. The two were together when Solomon prepped for Sanchez at Bishop Gorman in Las Vegas.