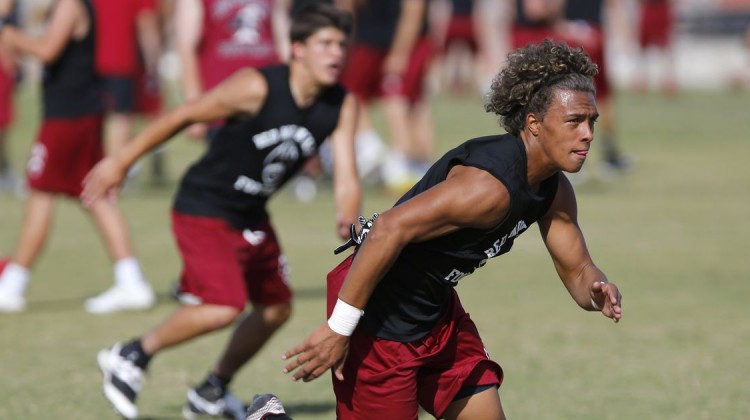 A Happy Holidays and early Merry Christmas to all the people who take the time to read my work every week. The feedback I’ve gotten (for the most part) since I started this has been phenomenal. So thank you once again and without further ado…

Running the Wrong Route…The Red Mountain coaching search has, quite simply, been an adventure. Last week it was announced the school would essentially have a “meet and greet” with lead candidates Randy Ricedorff from Show Low and former Mesa High head coach Scott Hare. This “concept” didn’t sit well with Ricedorff who withdrew his name shortly after pulling out the running for the same position at Corona del Sol. Ouch.

The school eventually elevated well-received defensive coordinator Mike Peterson to replace Ron Wisniewski who was fired after leading the Wolves to the 6A State Semi-Finals before losing to Mountain Pointe. Curious why they didn’t just hire Peterson in the first place.

“I’m going to work on my base this off-season,” Rattler told Sports360AZ.com coming off a 2900-yard, 29-touchdown season. “Sometimes I felt myself being a little off-base [last] season and that led to some missed throws.”

Rattler’s offers include ASU, Arizona, Oklahoma, Texas A&M, UCLA and Utah among others. He also got this one late last month.

Blessed to receive my 8th offer from Miami ! ?? #TheU pic.twitter.com/5nTftJcnKe

Speaking of ‘Neer Nation…The quarterback who preceded Rattler, Brian Lewerke, is on the mend following his redshirt freshman year at Michigan State. Lewerke’s season ended pre-maturely when he broke his tibia in late October on a hit by some guy named Jabrill Peppers. He is back walking but can’t resume any activities yet. When he can he’ll have the inside track to being the Spartans’ starting quarterback in 2017 according to head coach Mark Dantonio.

“I was pretty excited when he said that,” Lewerke said to Sports360AZ.com of Dantonio’s comments earlier this month following Sparty’s nearly unheard of 3-9 season. “It also made me made me motivated to prove that he is right in what he’s saying.”

He said the toughest transition to the college game is the “complexity and verbiage” of the plays but said it “felt like high school all over again at times” which is good news for MSU. Expect the game to slow down even more with more experience in the system and playing time in East Lansing.

Double Trouble…Two-sport stars are no stranger to Arizona or many parts of the country but tucked away out in Superior is 6-foot-4 senior Jalon Murray who had a team-high 14.5 sacks and six pass deflections for the 9-1 Panthers last fall but is also a beast on the hardwood averaging close to a double-double at 14.8 points and 9.5 rebounds a game. The rim-protector is also blocking close to three shots per contest.

“His build provides him opportunities for success,” Palmer said to my Sports360AZ colleague Andrew Luberda. “But his athleticism allows him to capitalize. Jalon can take over a game when he puts his mind to it.”

Just watch me go get it✊

Murray also applauded his efforts to improve his strength and conditioning.

Still A Big Deal…Remember Kayden Lyles? The former Saguaro Sabercat mammoth offensive lineman and younger brother of Wisconsin quarterback Kare’ earned the Wisconsin State Journal/WisconsinPrepZone.com’s 2016 All-Area Football Athlete of the Year playing mostly center and also seeing some time at defensive tackle. Middleton High went 9-3 this past season, advancing to the Division I quarterfinals. The Lyles’ moved back to Wisconsin this past year. Kayden will join his older brother in Madison next month.

“Very excited,” Kare’ told Sports360AZ.com about being reunited at the same school as his sibling. “Can’t wait for him to be here. I’ll be there for him if he has any questions about how the season unfolds throughout the year.