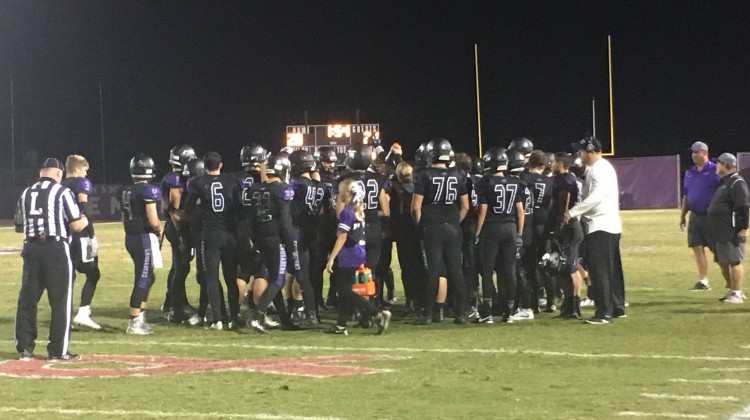 Northwest Christian avenged last year’s state championship loss to Pusch Ridge Saturday, pulling off a 28-21 win in round one of 3A playoff play.

Pusch Ridge got started early with a 63-yard touchdown run by junior running back Dakota Haynes, but that would be all for the Lions until midway through the third quarter.

Junior quarterback Christian Fetsis threw two interceptions in the first half, both of which Northwest Christian was able to capitalize on.

Northwest Christian senior wide receiver Caleb Johnson had two touchdowns in the first quarter. The first came in the drive after Haynes’ run and the second after Fetsis’ first interception at the Crusader’s own 30-yard line.

From there, Northwest Christian surged ahead.

“It felt great to have the momentum,” Johnson said. “Our o-line was putting in work, they were making huge blocks.”

At the half, Northwest Christian was up 21-7. Haynes came back out in the second half with power and was able to help put up two more touchdowns for Pusch Ridge, closing the gap to 28-21 with under five minutes left in the game.

The Lions weren’t able to make anything happen in their last drive however, and the Crusaders let the clock run to claim the victory.

Throughout the game, Northwest Christian head coach David Inness said the key for his team was to not panic.

“We knew that they would get a drive or two, we just had to make sure we made them earn it,” Inness said. “We just wanted to get enough plays and end up with more points than they did so we could play another week.”

Inness said he is thankful his team doesn’t have to travel, but he’d do anything to keep playing another week into November.

“At this point in the season we’ll play anywhere,” Inness said. “This 3A bracket is brutal. There’s some great teams.”