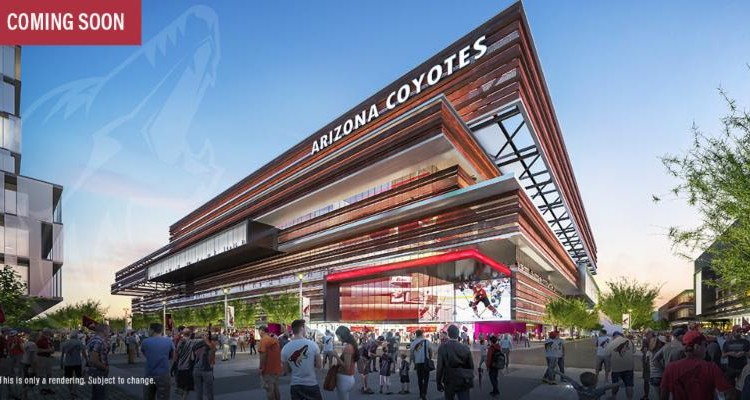 Hockey in Glendale is one step closer to becoming a thing of the past, or is it?  Monday, the Arizona Coyotes announced that they have opened up exclusive negotiations to build a 16-thousand seat arena in Tempe (listen to full press conference above). The development would have a second facility that would seat 4-thousand fans and would be the home of Arizona State hockey, Coyotes practices, youth programs and community events.

The Coyotes have until June 30th 2017 to create the budget, design, and operation structure of the arena. This comes as no surprise given the tenor and tone of the “working” relationship between the hockey team and the City of Glendale. I have to be cautious here because I’ve seen too many false reports and people getting out in front of the Coyotes and the deal falls apart. At the end of the day, the one question to be asked is “who’s paying for this”?  IF the Coyotes and Arizona State can front the deal, great!  The Coyotes-Glendale Arena marriage goes down right now as the biggest mistake in Arizona Sports history and the team moving to Tempe would be a terrific “save” by the franchise.

So with the Coyotes now going public with this plan, the next person up is Robert Sarver. What is the Suns owner going to do in his pursuit of a new facility. Glendale is going to be left with a great building, but no tenant. I can’t imagine the Suns getting away from Downtown Phoenix, but nothing with the current owner will surprise me.

Diamondbacks owner Ken Kendrick should be an interested observer on this story. What are the Diamondbacks going to do with their current unrest of improvements to Chase Field? Is their wandering eye still looking at the two locations around the 101-202 between Mesa, Tempe, and Scottsdale?

But today, the Coyotes are the headline. The franchise has been in a bad situation for years. Fans have grown fatigued with the day-to-day reports of the team staying and moving. The 101-202 freeways intersecting in Tempe-Mesa is the center of Maricopa County. Now the clock starts ticking again on the hockey franchise to finish off the deal.