It’s a good day for a football game. Even if the officials screw up calls, players kneel during the anthem, or a fight breaks out in the upper deck of the stadium, I’m glad I’m here.

It’s been a long week for our Country. A week that for some was exhilarating because their candidate won, and for others despair and sorrow because they didn’t get the outcome they thought was coming their way. Riots, finger-pointing, name calling, blame game going on all around us. Neither side wanting to hear what the other has to say. Toxic.

I walked around the Hyundai West Lawn two and a half hours before kickoff of todays Cardinals-49ers game in Glendale. Because the game was a Salute to Service event, there was plenty of patriotism among the masses. I asked a few fans about the need to get into the stadium to unleash their passion towards the Cardinals and 49ers and to move on from the Presidential results. A few had unprintable words and thoughts towards 49er quarterback Colin Kaepernick, others said they wanted to put the election behind them but there wasn’t anything to grab a-hold of after Tuesday nights result. They all said they’ve watched the rioting and President elect Trump sounding different on Obama,  Obama care,  etc. All of them said they voted, and all of them were still raw over the last week. All of them were wearing Cardinals or 49ers gear. In my view, all of them needed a game.

This is where sports fits into our society, perhaps we’ve gotten a little fat and bloated with our consumption of fun and games and a swing the other direction is exactly what our Country needs. This past week, CNBC reported that Disney is strongly considering spinning off ESPN. NFL ratings in 2016 have taken huge drops(not dips). The sports “bubble” may be bursting in certain parts of our society. By the time the Seahawks and Patriots finish playing Sunday night, I will have spent close to 10 hours consuming the NFL. Monday night and Thursday night games could push that total to 20 hours. Less is more. Take away five hours of sports consumption and go put into serving your community or becoming politically active.

There shouldn’t be much, if any, drama about today’s outcome on the field. The 49ers stink and the Cardinals should be desperate. I like the NFL and sports on days like today. For a few hours, blocking and tackling DO matter more to me.

Cardinals have Plenty to Prove vs Packers 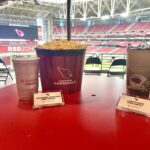