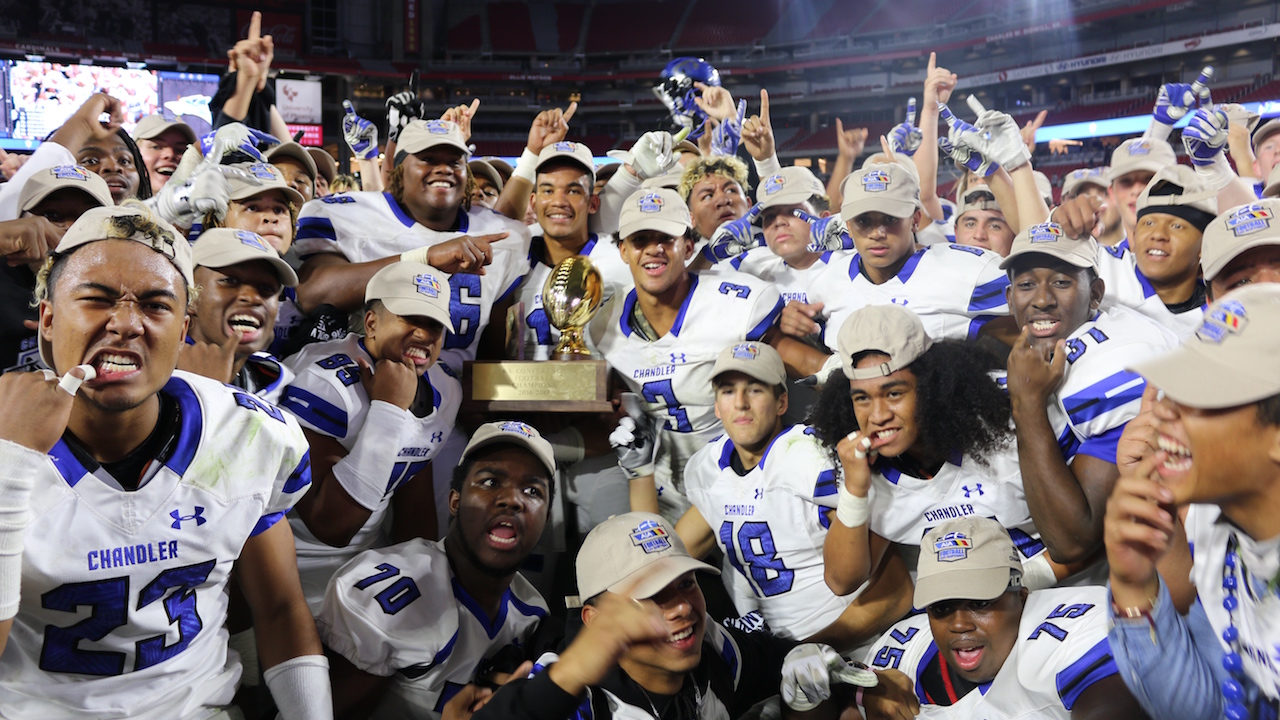 And just like that…it’s over. Well, sort of. Although we said goodbye to 2016 Arizona high school football play on the field, off it there is very little lag. Much like with the NFL AZ prep football never exactly “goes away.”

I’m going to do my best to keep the notebook moving in the “off-season.” Here are some things which caught my eye the past couple weeks.

All In…It’s no secret college coaches flock to Saguaro to check out the Sabercats’ loaded roster and clearly they were the most talented team in 4A and some would argue the entire state. Even at the high school level it isn’t always easy juggling egos and getting an elite group of players to “buy in” to the bigger picture of winning as a team. Props to head coach Jason Mohns for keeping his teams’ focus clear the entire season. He says the players deserve the credit, not he or his coaches.

“This has been one of the most motivated groups of kids I have ever had,” Mohns recently told Sports360AZ.com. “Going all the way back to January these guys have been hungry and focused on trying to win a fourth consecutive state title.”

Sometimes Different Is Good…Despite a coaching change at UC-Davis, Desert Edge quarterback Tehran Thomas remains committed to play for the Aggies who play in the Big Sky Conference. In reality, the situation may turn out even better after it was announced former Boise State and Colorado head coach Dan Hawkins would replace Ron Gould. Thomas, who was recruited as a running back, is looking forward to getting to know his new coach.

“I have read and heard about all the great players he’s coached and the coaching accomplishments Coach Hawkins has received,” Thomas told Sports360AZ.com Wednesday. “I’m excited to get down there and work my butt off, absorb all the knowledge I can from [Coach Hawkins].

Bad Timing…My friend Ralph Amsden over at AZ Varsity pointed out to me the unique circumstances of Devan Scanlon whose high school journey took him from Saguaro, to Williams Field, to Basha and finally Hamilton where he played safety for Steve Belles. Two of his former schools won titles on Saturday but good for Scanlon for taking it all in stride. In an environment that can often be filled with finger-pointing and selfishness it’s nice to see things like this.

life isn’t all about rings. so if you left a school that won a state championship and are hating. you’re wrong, be happy for the homies man.

Power Shift?…Moments after Chandler got the ultimate payback on Mountain Pointe Saturday night in Glendale, Chilly Madison caught up with Wolves’ star receiver Johnny Johnson who had this to say about their “friends” down the street on Arizona Avenue.

Rest assured the Huskies will keep this handy for a little extra motivation ramping up to next fall.

A Familiar Theme…The Queen Creek Bulldogs post-season roadblocks certainly haven’t lacked consistently over the past six years. Outside of 2012, the Bulldogs have lost to the eventual state champions every other season since 2010. This year it was Williams Field. The others it was when Saguaro took home a title. Something tells me it’s only a matter of time before QC head coach Travis Schureman reaches that pinnacle once again. He already has one state title at QC on his resume’ after the Bulldogs beat Desert Edge in 2012.

Getting Defensive…As the saying goes, ‘Defense wins championships.’ Nobody needs to remind the Thatcher Eagles who clinched a 2A State Championship last weekend at Chaparral knocking off previously unbeaten Round Valley.

Sean Hinton’s team gave up just 11.5 points per contest in 14 games. The bad news is the majority of their offensive production graduates but look for the defense to remain strong in 2017 with Thatcher’s two top tacklers, Riley Morris and Quinton Turley, both back. The sophomore duo combined for 92 stops, including eight for loss this fall.