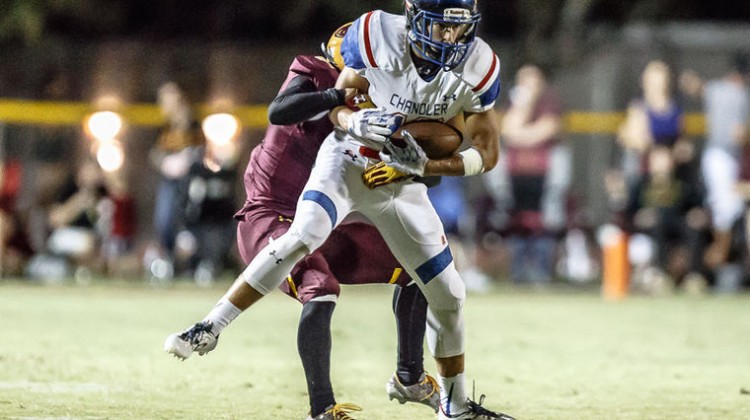 Fútbol and not football is the popular sport in Mexico. American football actually barely turns the needle when you compare the two sports. But for Chandler wide receiver Gunner Romney, that didn’t stop him from developing a passion for it as a kid.

The new wide receiver this season for the Chandler Wolves transferred in from out of town this season from El Paso, Texas. But that is not where is originally from. Romney was born in Mexico and lived there until he was in the fifth grade.

Romney’s mother is from Arizona and his Dad played football growing up so their American roots includes a love for American football though they were not in America. That was passed along to Gunner as a young kid growing up.

“Though there wasn’t a lot of football where I was from, my Dad started getting a group of us together so we could play,” Romney said. “We eventually got enough players to turn it into a league with a few teams and we would also travel to play teams across the boarder.”

Romney’s team would play in Safford and elsewhere in Southern Arizona to experience competition outside of Mexico. The small league and travel opportunities playing at the pee wee level allowed him to develop a passion for the game as the competition level got higher..

“By the time we moved to Texas, football for me got a lot more serious and competitive,” Romney stated

Now fast forward to his junior season in high school and Romney is playing in front of a lot of family having moved to Chandler, Arizona. Going into the Wolves’ first sectional game of the 2016 season against Basha, he is second on the team in receptions, receiving yards and receiving touchdowns behind UNLV commit Johnny Johnson.

His impressive play as an underclassman in Texas has carried over to his tim in Chandler which has already landed him some scholarship offers at the next level including BYU and Hawaii with more keeping close tabs on him this season.

“They tell me they like my speed and athleticism,” Romeny explained.

Romney and the Wolves after suffering a tough loss to Mountain Pointe have bounced back in a big way with three straight wins.