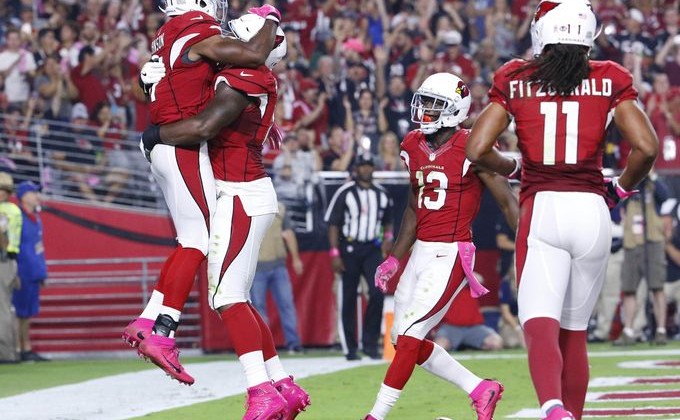 The Arizona Cardinals returned to their nest Monday thumping the New York Jets 28-3 before an announced crowd of 64,709 at University of Phoenix Stadium in Glendale. With the win the Cards improve to 3-3, tied for second with the Los Angeles Rams for second place behind Seattle (4-1) in the NFC West. The Jets fall to 1-5.

1. One-Man Band (Again)…Each week we seem to be running out of adjectives to describe David Johnson. It would be hard to imagine where the Bird Gang’s offense would be without him the last two games. After shredding San Francisco’s defense for close to 160 yards and two scores, he pulled off the hat trick on Monday Night Football.

He leads the NFL with 8 rush TD this season

The young man who grew up in Clinton, Iowa clearly has no problem on the big stage. “I feel like the way our line is blocking…is making my life a lot easier,” Johnson said. “We knew if we got it going early…that’s where it starts.” Johnson tallied 111 yards on 22 carries and added three receptions for 27 more.

2. Unscheduled Landing…The Jets offensive struggles with turnover-prone local quarterback Ryan Fitzpatrick are well-documented but it’s even harder to find offensive efficiency when you’re penalized 10 times in a half (eight of which were accepted). New York came into the game tied with San Francisco as the second-least penalized team in the league behind only Green Bay. The Jets officially finished with 10 penalties for 83 yards with a handful more being declined. The only thing worse than the flags may have been converting just two of 13 third downs (15%).

3. Streak Busters…It took the Cardinals seven games but Johnson’s 58-yard burst down the Arizona sideline ended an ugly trend of scoreless first quarters dating back to last season. With that being said, outside of DJ’s run the offense managed only 42 total yards on the other 16 plays. Their only other first down in the opening quarter came on a defensive holding call on Darrelle Revis on third-and-seven. “We finally scored in the first quarter,” head coach Bruce Arians deadpanned after the win. “It was a nice run.” The offense picked up the pace in the second quarter with an 11-play, 75-yard drive capped off by Johnson’s second score, this one from two yards out. They put the game away with a 14-play, 89-yard drive resulting in Carson Palmer to Michael Floyd pretty touchdown.

4. Rush To Judgement…You’re destined for NFL failure when your offensive imbalance is as poor as the Jets was in Glendale. At the end of the third quarter New York had a measly 28 yards on the ground. Fitzpatrick had 31 pass attempts, to just 12 rushing.

Key to success in the #NFL: make teams one-dimensional.

Mission accomplished for #AZCardinals as #Jets run 51 plays, 37 of those passes.

They finished with 33 net yards on the ground, just eight more than Andre Ellington. “I thought we were flying around,” Arians said of his defense. “That’s the way we played last week and should have been all year.”

5. Another D.J. Rising…While David Johnson is getting most of the headlines and deservedly so, it was hard to ignore the play of safety D.J. Swearinger who had an interception at the goal line, two pass defenses and four total tackles. His bone-jarring hit on Charone Peak a few plays before the interception re-electrified the sellout crowd. It also drew a shoutout from his head coach in the post-game press conference. “He’s been playing really, really solid.”