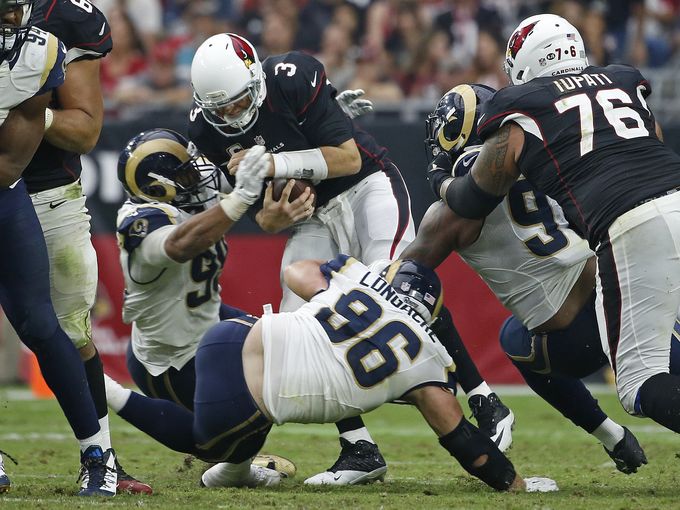 QBs that had a rough weekend in our great state. Let’s start with Carson Palmer, who had to leave Sundays loss to the Rams with a head injury. He has been put into the NFL concussion protocol program and his availability for Thursday nights road game at San Francisco is up in the air. Palmer had a quarterback rating of just 51.1 against LA before the injury occurred. His stat line in the loss wasn’t pretty, throwing for just 288 yards(8 yards per completion average) and he was sacked three times. With the Cardinals in such a deep hole at 1-3, it’s desperate times for the organization. If Palmer can’t play Thursday night, Drew Stanton would take his place.

Meantime, Arizona quarterback Brandon Dawkins and Arizona State quarterback Manny Wilkins both had to leave their games over the weekend because of injury. Of the two, Wilkins injury appeared to be more severe,

forcing him off the field and to the locker room in the Sun Devils blowout loss at USC. ASU head coach Todd Graham is scheduled to meet with the media on Monday and SHOULD be able to give a more definitive update about Wilkins, though ASU has been coy through the years when it comes to injuries at the quarterback position. Brady White did some nice things, while filling in for Wilkins.

Dawkins took some shots during the Wildcats loss to UCLA on Saturday night. With Anu Solomon left back in Tucson for the game, former Basha high school  standout Zach Werlinger had to take the field once Dawkins went to the sidelines. Head coach Rich Rodriguez ultimately went with true freshman Khalil Tate, who produced some nice numbers(5-9-72yds 2TDs) Will the Wildcats continue with the 17-year-old, now that he’s had some limited success?

Northern Arizona was without starting quarterback Case Cookus in Saturdays loss at Northern Colorado. Cookus, considered one of the top FCS quarterbacks in the nation, suffered a shoulder injury earlier in the season and wasn’t available
for the Lumberjacks on Saturday.