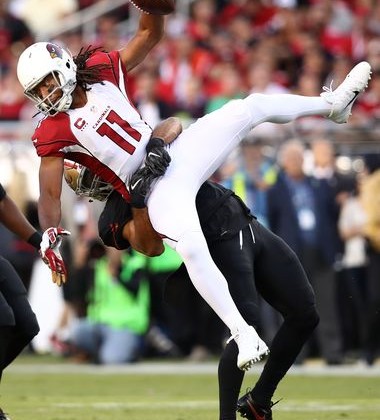 Time to take a minute to enjoy the process. I am pleased that the Cardinals won Thursday nights game against the 49ers. I really am. It wasn’t a game that will make the next edition of “All or Nothing”, but given what we’ve been subjected to, I am more than happy to talk about a 2-3 football team, rather than the alternative.

Watching #11 do his thing for the Cardinals makes it all worthwhile. I watched #11 bail out his team once again. Without #11 Thursday night, the Cardinals are 1-4 today. Sure, David Johnson might have found a way to run for more yards and score, I will give you that. But, #11 was the ONLY threat that the Cardinals had in the first 25 minutes of the game. Without #11, there would’ve been no offense what-so-ever. For some reason, number #11 catches almost everything thrown in his direction. It’s the darndest thing. While former first round pick Michael Floyd moves closer to 2017, and the term “former Cardinal”with his continual clanking of attempted catches, #11 is like a venus fly trap.

#11 is just like #51, #34, #19, when it comes to talking about the all-time greats in Arizona sports. Beyond that, #11 may go down as the greatest to ever wear #11 in the history of sports. I can’t think of another in any sport who has accomplished so much in such a graceful fashion. Thursday night, #11 caught two touchdown passes for the 18th time in a NFL game. Both times he tossed the ball right back to the officials and celebrated in a professional manner.

It’s funny that Thursday nights game turned on a taunting penalty against a 49er running back who was celebrating his run for a first down. Larry Fitzgerald would never do something dumb like that.