The Ricedorff name has become as synonymous with Show Low High School football as the clean, relaxing four-season climates of the White Mountains in northeast Arizona.

Head coach Randy Ricedorff is the architect behind one of not only the dominant programs outside of the Valley, but in the entire state. The Cougars improved to 5-0 Friday whipping South Mountain 42-6 in their only regular season scheduled trip to the greater Phoenix area.

Show Low looks every bit the part of a 3A championship contender coming off an 11-1 2015 season which saw their perfect run end in the Division IV quarterfinals with a loss to Lake Havasu.

The 2016 version is deep and talented starting with Rhett Ricedorff who took the reins last season as a junior and tallied 30 total touchdowns and over 3,000 total yards as a junior. The three-year varsity starter knows a thing or two about winning, just like his dad and older brother Rathen, who plays at Mesa Community College after a stint at ASU following his Mormon mission. The older Ricedorff’s video game name numbers for the Cougs (8,400 yards and 112 touchdowns) shattered several state records.

It’s easy to see why the apple doesn’t fall too far from the Ricedorff football family tree.

“What an honor it is,” Randy Ricedorff said to Sports360AZ.com Friday night about having the opportunity to coach his sons. “They just happen to be good football players on top of it which is an added bonus for me.”

Rhett has not only carried on the Ricedorff legacy but, in many ways, has established his own identity besides just being Rathen’s younger brother. Much like his older sibling, he doesn’t shy away from the big moment.

“I don’t really focus on that as much as people think,” Rhett explained to Sports360AZ.com about following his brother. “I think I handle the pressure well…it doesn’t get to me much.”

“He’s doing great,” Rathen said from the Show Low sideline the night before Mesa C.C. takes on rival Glendale C.C. “It’s just fun to get the chance to [see] him. I’m glad I get the opportunity to be around and get to see him play.”

Much like the popular 1970’s comedy, the Ricedorff’s are definitely keeping Show Low football, “All in the Family.”

Zone Read: Off and Running 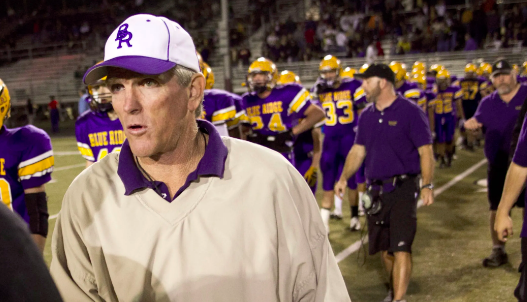