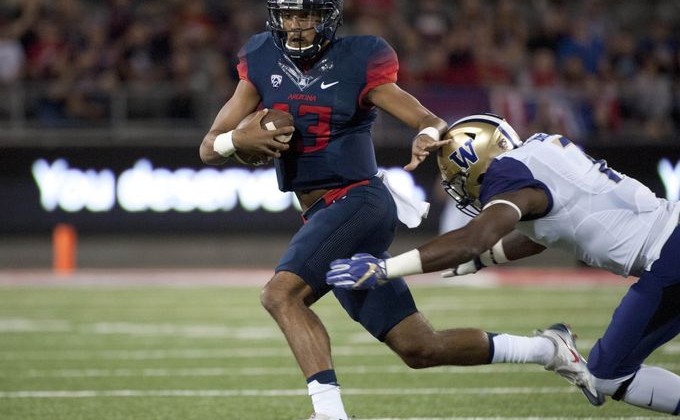 Give Rich Rodriguez and his team plenty of credit, they don’t roll over and quit. Playing with their backup quarterback and third string running back, the Wildcats pushed 9th ranked Washington into overtime before succumbing to the Huskies 35-28 in overtime.

Brandon Dawkins rushed for 176 yards and two TDs in place of the injured Anu Solomon. Freshman running back J.J. Taylor had to leave the game in the third quarter with an apparent ankle injury, so the Wildcats had to turn to seldom used Tyrell Johnson. Through all of the injuries Arizona managed to push the game into OT. Washington would score in the extra period on a Jake Browning TD pass to junior WR Dante Pettis. Arizona would have one last chance, but a bad snap on 4th down would rush Dawkins and the pass would fall incomplete giving the Huskies the road win.

Arizona falls to 2-2(0-1) in Pac-12 play, Next Saturday the Wildcats will hit the road and play the UCLA Bruins at the Rose Bowl in Pasadena on Saturday.