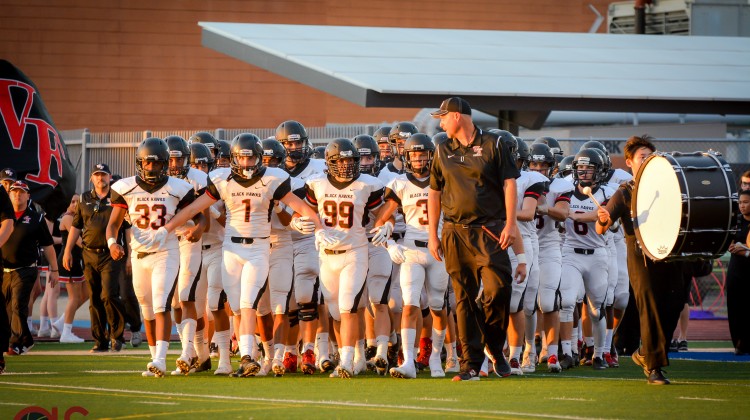 Good Things On The Horizon? …I spent Week Zero up in north Scottsdale checking out Horizon and their first-year head coach Ty Wisdom who debuted with a 44-7 win over Yuma Cibola (‘The Dawg Pound’ was loud and on point all night, as well). It was a welcomed relief for a team who went winless in 2015. Expect the Huskies to be more seasoned with several younger players back from last season’s injury-depleted squad. Two juniors, linebacker Brett Rudolph and two-way lineman Isaiah Mursalot impressed. Rudolph, whose older brother Luke plays for NAU, recorded an interception which set up a score and the six-foot-four, 281-pound Mursalot helped the Huskies net 240 rushing yards in a game which was essentially over by halftime.

Speaking of Huskies…Hamilton didn’t waste any time getting their season off to a quick start shutting out Boulder Creek 46-0 Friday night in Chandler. Steve Belles’ team is loaded with playmakers on defense. Middle linebacker Ladimor Hervy was everywhere with 16 tackles. The Huskies recorded six sacks, forced two turnovers and blocked a punt. Expect a tougher challenge this week at Queen Creek.

Williams Field senior running back Josh Alexander was possessed gaining close to 150 yards on two of his long touchdown runs, as well as housing a 61-yard punt return in the Black Hawks blowout win. If you don’t believe me, check this out. My guess is Alexander’s eye-popping 52.7 yards-per-carry average (3 rushes, 158 yards) will take a hit this week.

Less Is More…Did this story on Valley Vista’s Creston Cooledge a little over a year ago entering his junior year. It’s clear he works just as hard on his body as he does in the classroom. He’s shed weight and toned up to six-five, 265 pounds while improving his stamina and quickness. Some of his lost weight may be attributed to his unique hobby when he’s not on the field or in school.

Honored and blessed to recieve an offer from the University of Montana! #GoGriz pic.twitter.com/zyjKF076m2

The lineman with great grades has offers from Cornell, Columbia, Montana and New Mexico State among others. It’s a pretty simple formula: production on the field paired with academic success will get you recruited. Expect a big senior season from this west Valley rising star.

Life’s A Beach: One recent non-football story which caught my eye was Shadow Mountain point guard Marcus Shaver committing to UC-Santa Barbara which sits along the California coast and competes in the Big West Conference. His return to Arizona has been a unique journey.

Im beyond blessed to announce that I have committed to UCSB! All glory to God. pic.twitter.com/6XLWqyALLM

“After watching them play I could really see myself on the court with them,” Shaver told me. “Playing with Earl Watson Elite [AAU] really changed my attitude and approach to the game…I can still be effective without having the ball in my hands.” Talented player with a bright future on and off the court.