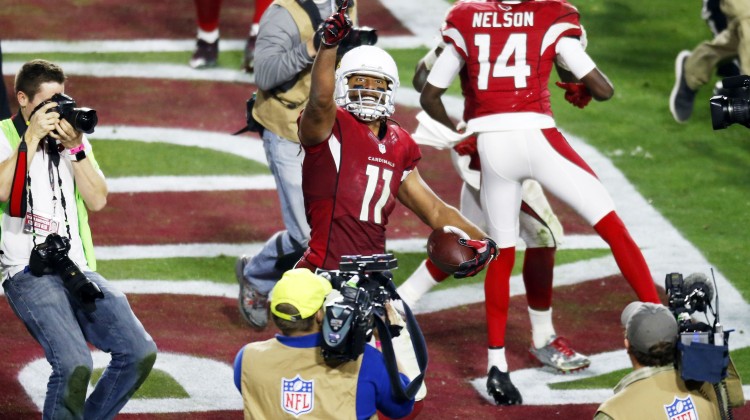 We are halfway through All or Nothing, the Amazon series following the Arizona Cardinals through the 2015 season. The Cardinals sit at 9-2 and are on the road taking on the division foe St. Louis Rams.

“You ain’t trying to play up Chris’ ability or Andre’s ability. You want to play to your ability, and if you do, whoo, s**t.”

– Running back coach Stump Mitchell, talking to David Johnson. Mitchell doesn’t fit the mold of the fast-talking Arians, Buckner or offensive coordinator Harold Goodwin. Mitchell is more reserved but is good at talking up his running back.

He’s referring to a defensive party, and party favors are sacks, interceptions and trash talk.

“When do you ever see a receiver bury a DB like that in space?” – Terry McDonough, VP of player personnel, on Larry Fitzgerald’s block that set up a Michael Floyd touchdown.

One of the themes of this series was Fitzgerald’s role change from outside the numbers to the slot position. While he may have been reluctant, he accepted the role and had another incredible year.

Mathieu is referring to running the ball, and running it well. In this span of episodes, Johnson rushed for 378 and three touchdowns.

This episode looked up for the Cardinals, going 3-0 as they are about to wrap up the regular season. The episode, the series and the season take a turn when Tyrann Mathieu goes down with an ACL injury. We know the end of this story, Mathieu is out for the year, but it is still just as shocking and unsettling to see him go down.

In this episode, you see a rookie who has made huge plays in big scenarios but hadn’t been able to string together a dominating performance from start to end. Those three games provided the national audience to see just what Johnson can do.

“I’d jump offsides for this.” – Alex Okafor on Freeney’s food. Dwight Freeney made a Jamaican dish for his fellow defensive players and shared some tips on getting to the quarterback. In a short time, he transformed the defense on the field but also off the field. The Cardinals sacked Aaron Rodgers nine times after the food-ball (patent pending)jamboree, so it must have worked.

“Make that f****r never want to come back here.” – Arians on Rodgers

The Cardinals got to Rodgers eight times in Week 16 and dominated the Packers 38-8. Though, as we see later, Rodgers came back to the desert and almost made the Cardinals pay.

“He kind of reminds me of Marshall Faulk but he just bigger than him. You know what I mean?” – Mathieu on David Johnson.

“Give me some water, I’m tired.” – Cory Redding brought a fumble back for a touchdown.

The 35-year-old had a chance to bring one back against the Lions earlier in the year, but got taken down inside the five. The big guy wouldn’t be denied this time around.

“Brooks, get that pizza off my leg” – Red Bryant’s wife

Red Bryant emerged as one of the midseason signees for the Cardinals. It was a whirlwind for him as he worked out and signed on Thanksgiving and was in Arizona ever since. The series displayed how the rest of the Bryant family was handling the move. In a Facetime session with Bryant, his wife was wrangling up all the kids, to no avail. As one of four boys, I can attest anything, even parent’s legs, can be a resting spot for a piece of pizza.

This episode was one of the tougher to get through. I remember the entire Valley feeling a sense of uncertainty when Mathieu went out with the injury. You didn’t want to breathe wrong because it could this Super Bowl run could come crashing down. Watching Mathieu, who had been through so much to get here, go through it again was difficult. I was sitting in on that press conference where Arians shared the news that Mathieu was out for the year, and it was one of the most somber rooms I had been in as a journalist.

On top of that, the news that Michael Bidwill’s dog, Reilly, had passed was crushing. I was watching next to my golden retriever, Roxy, and brought her over to my chair after Bidwill, holding back tears, described what it was like without his best friend.

The man tackled, sacked, cooked and led this episode. It not only showed how much of an impact he had on the field but also in the locker room for young pass rushers like Markus Golden.

NFL Playoffs Divisional Round: vs Packers

“What the hell is the matter with you? Don’t cheer when the offense is on the field.” – Christine Arians

She sounds like a coach’s wife here. After a big play, her suite starts chanting “Larry, Larry”. One problem though – the Cardinals were on offense. This was a rookie mistake, and Mrs. Arians let everyone know.

Spouses and family members of pro athletes and coaches are rockstars. While utter chaos is going on, it was hard to imagine what Christine Arians is going through, but she looked bulletproof. As the Cardinals are knocking on the door to win the NFC Divisional round, she utters under her breath for her husband and perfect match to finish the job.

Watching Tyrann Mathieu go down was disappointing, but also watching Cory Redding not be able to play is tough as well. He was injured the last week of the regular season and was a guy who really got to show his personality, whether it be his Garfield shirt, baking cookies for the team after wins or watching him take it to the house against the Packers.

The Green Bay win will go down as one of the best Arizona sports moments ever. From the deflating Hail Mary at the end of regulation to Larry Fitzgerald’s 75-yard scamper and eventual touchdown catch, my heart rate spiked watching and I knew how this ended.

Christine showed Bruce wasn’t the only good sound bite in the Arians household. Getting to see what it is like during an NFL game, and a playoff game, was fascinating. She also showed the poise and fire her husband possesses as well.

“I don’t have time to reflect.” – Larry Fitzgerald when asked about being able to reflect on his historic postseason run.

Fitzgerald was all business when carrying the offense and the team to victory. He set his sights on beating Carolina.

Mathieu obviously couldn’t end the year on the field, but he wanted to make sure his team was playing hard for themselves.

“On that play, it looked like the Harlem Globetrotters against the Washington Generals.” – Troy Aiken after Ted Ginn slithered his way through the Cardinals defense for a score. Sadly for Cardinal fans, there were a lot of those plays.

Sadly for Cardinal fans, there were a lot of those plays.

(Note: It doesn’t sound any better in Spanish)

“Not in a million years did I see this one.” – Arians to Palmer late in the game.

I don’t think many Cardinal fans did either.

I wouldn’t necessarily call these highlights for Cardinal fans, but it was amazing to watch Cam Newton work in that game. There was no doubt he was the MVP after that night.

While the loss was disappointing, this team did things no other Cardinal team, or NFL team had done. It was a perfect gift to the fans to have cameras there chronicling it all.

Cardinal fans would like to forget most of this episode, but the one thing that will stick with most of them is Mathieu’s plea with his defense to play for their team and their brotherhood. It’s torture for him to be there, but he needs to communicate that to his t

People will be all in when football rolls around.