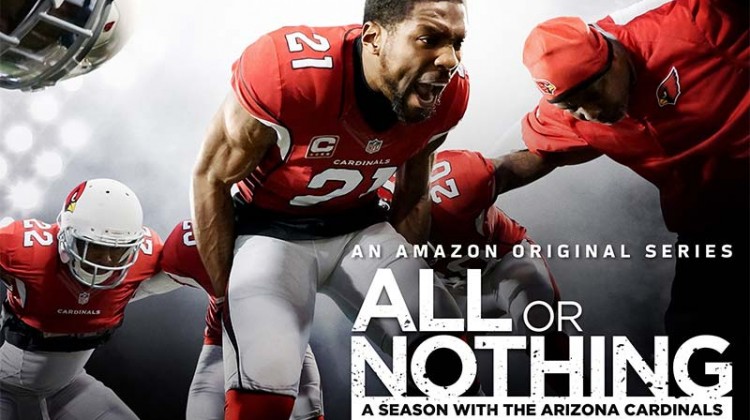 Like many of you, I couldn’t wait for “All or Nothing” to be released on Amazon. A film crew followed the Arizona Cardinals through the 2015 season. From inside the draft room to contract negotiations to ever F-word uttered by the coaching staff, this crew brought an inside look unlike before.

I love this idea so much. Hard Knocks is one of my favorite shows on TV, and All or Nothing has the luxury of turning a series around in four months rather than a week at a time. Plus, it doesn’t hurt having the games actually mean something.

“As far as goals go, we have one: putting the f*****g ring on our finger.” – Bruce Arians. This is 38 seconds in to the series, and that sets the tone for the entire season. Goosebumps.

“I think he’ll be a bell-cow by Thanksgiving.” – Arians on rookie running back David Johnson. Perfect foreshadowing for Johnson, who notched 13 total touchdowns in his rookie season.

“Some people went Beast Mode on me, but I tried to go Beast Mode back.” – Steve Keim’s son talking about his soccer game. This series does a fantastic job showing these guys as real-life people. The Cardinals have a weekly family day, and it’s endearing to watch Keim’s son talk to Chris Johnson about his soccer game, why Johnson has gold teeth and then wrapping up the conversation with “100+0 is 100”. Perfection.

“Smoke thought his middle name was M*********r” – Arians on John Brown as he warns his rookies that when he gets on him, it’s not personal.

I was already pumped for this, but early in the series, I hear the one and only Jon Hamm (no relation, but that hasn’t stopped me from trying to convince people he is my uncle for personal gain) navigating the audience through this journey. HOO BOY.

One of the many moments where this crew was able to pull back the curtain was in the war room for the 2015 NFL Draft. The Cardinals were on the phone with Nebraska’s Ameer Abdullah, a game-changing running back who fits a need. The Lions, who held the pick ahead of the Cardinals, took Abdullah and the air was taken out of the room. BUT the Cardinals didn’t panic. They made a trade with the Baltimore Ravens, adding a fifth-round pick, which eventually became West Virginia linebacker Shaq Riddick, to slide back three picks. They used their second rounder on Markus Golden and took David Johnson in the third round. One season in, it looks like the Cardinals won that scenario. Johnson finished with 13 touchdowns to Abdullah’s three and Golden had 31 tackles, four sacks and two forced fumbles.

Along with Hamm’s narration, two prominent voices are the Cardinals radio crew of Dave Pasch and Ron Wolfley. It was a constant reminder just how good that tandem is. They have to be one of the best crews in the country, and Arizonans get to listen to them each and every Sunday.

It’s no secret Arians is one of the best soundbites in the NFL, but when you are able to hear him with minimal filter with his players, it’s something else.

“I don’t want the feeling to go away quick” – Arians after losing to the Rams in Week 4.

The team had a “24-hour rule” to process their games, then it was on to the next one, but Arians wanted this disappointing loss to stick with his team for a second so they could get back to work.

“I don’t like a lot of things. I don’t like walkthroughs, but I understand why we do it. You like winning. That’s a part of winning” – Kevin Ross, cornerback coach.

This was an interesting exchange between Ross and defensive back Jerraud Powers. Ross was trying to get Powers to help set the tone for the defense in practice by becoming a little more vocal. Powers, who had his eyes to the ground, said he wasn’t a “ra-ra” guy. To be honest, Powers looked like more of a rookie than a guy who had been productive in the NFL since 2009. Ross put things into perspective.

“It’s a humble flashy, but he’s the flashiest” – Jerraud Powers on Patrick Peterson being the flashiest defensive back on the team.

“Pat. P” took objection, but when the follow-up question was what his “work car” was, Peterson reluctantly revealed it was a Rolls Royce.

Never underestimate the power of doing it for the guy next to you! #Brothers #SavageSZN https://t.co/X1ubmVdyan pic.twitter.com/HZa41TwjxC

“You have hit somebody in the mouth for 30 minutes. We’ll come back in and see how bad we got to them for 30 more.” – Arians pregame before the Steelers. Again, Arians is a master wordsmith and is one of the intricate football minds, but he knows when to keep it simple.

One of the biggest things this episode goes into is Patrick Peterson’s diabetes diagnosis in 2014. Peterson’s production was down in 2014, and for good reason. Seeing the side-by-side photo of his weight fluctuation was shocking.

Keim and Bidwill make a quick trip to Notre Dame for a scouting trip while their team is on the road. Philbin is only in the show for a few seconds but gives provides a big voice from his little stature. Classic Reg.

“I remember the first time I sat down with B.A. when he drafted me and he told me that story. Now, me as a player who just got a second chance, I’m able to come into work every day more comfortable, more relaxed because my coach showed me his scars, showed me what he’d been through in life. I think that’s why we relate to each other, not to mention we both have crazy swag.” – Tyrann Mathieu on how he levels with Arians. Ty doesn’t have a Kangol hat, but he has swag too.

“I’ve been abusing that boy since 2005” – Freeney on Eugene Monroe. Some people get dizzy from the spin move. In a shortened season, Freeney came up with eight sacks.

It was an honor to see this live @dwightfreeney pic.twitter.com/yjJJHtRM2I

“That team has punked us for three years. Last year, here, you look at that last run, it’s going to go down in infamy. When he goes to the hall of fame, they gonna show it. So everybody on there will get a chance to be in Canton. The man ran through our whole defense. We laying on the ground, we reaching for blocks and then he runs into the end zone and grabs his nuts.” – defensive line coach Brentson Buckner

Arians is a fantastic sound bite, and he hires them as well. Buckner shows throughout the series that he has plenty of personality and doesn’t fall far from the Arians tree of quotes.

“We’ve got to keep out the noise. Don’t let individual b******t take over because you have some m**********rs patting you on the back. There ain’t enough room for all the m**********rs that have jumped on the bandwagon. They’re coming in left and right, wanting to join up. They ain’t on this f*****g team. That elevator falls fast as a s**thouse. Penthouse now, s**thouse in a minute. Don’t lose sight of the big picture.”

– Arians didn’t like hearing the Cardinals were the odds-on favorite for the Super Bowl. He gave an elaborate reminder.

“We had dinner and at one point he drops the F-bomb three times in one sentence, and I stopped and I sat back and I thought, ‘noun, verb and adjective — very good.'” – Bidwill on the first time he met Bruce Arians. Sounds about right.

“When I hear of guys sleeping in their office, I wonder what they hell they’re doing there because this game ain’t that hard. The work will always be there. The kids won’t. I tell my coaches, you miss a recital, piano, dance, whatever, a football game, a basketball game, I’ll fire you.” – Arians explaining the work-life balance while sitting on his boat.

“The NFL is very political and my husband is incapable of playing politics.” – Arians’ wife, Christine, summing up her husband.

Reilly the dog makes an appearance and she is the best.

One of the coolest moments in the series is when Tyrann Mathieu passionately addresses the defense prior to the Seattle game. It’s so cool to see him step up as a lea- OH MY LANTA. CORY REDDING IS WEARING A GARFIELD SHIRT.

This episode is fantastic because it helps us revisit the Drew Stanton dance party. On the road, Andre Ellington seals the game and Stanton takes it from there.

Bidwill’s dog is spunky, resilient pup who overcame cancer, but is still battling kidney issues because of the treatment. She’s awesome, let’s just leave it at that.

“Paityn, daddy can’t wait for you to give you snuggle kisses on the cheeks. Daddy loves his princess to beeee. To beeeee.” – Patrick Peterson, singing to himself about his daughter, and princess, to be while returning punts in practice.

The Cincinnati game had plenty of ties to the Cardinals. Carson Palmer and Rucker both had histories there, and the defensive lineman didn’t like seeing his young teammate yucking it up with their opponents.

“We had critical penalties, and Ted you are very, very lucky you aren’t right there. And if you were right there, you wouldn’t be sitting where you’re at right now.” – Arians to guard Ted Larsen

The end of the Cincinnati game was chaotic. Carson Palmer was setting up the offense for a Chandler Catanzaro field goal in the closing seconds of the game. Ted Larson jumped offsides, but lucky for Cardinal fans, the Bengals baited him into it, which resulted in an unsportsmanlike penalty and a chip shot for Cat-Man. Had Larsen committed a false start, a 10-second runoff would have happened, and the Cardinals would have headed to overtime without the opportunity to kick the field goal.

At this moment in the series, I was looking around thinking I shouldn’t be here for this. Larsen looks like he just saw a ghost, and everyone got a few knots in their back from that one.

The Iupatis were featured often in this episode. Mike went down with an injury against the Seahawks, was taken off the field in an ambulance but played two weeks later against the San Francisco 49ers, his former team. The Cardinals struggled throughout the game but were able to pull the win out at Levi’s Stadium. This quote came when the Niners tackled the Cardinals behind the line of scrimmage. She may be biased, but she was probably right.

Carson Palmer gave some hot takes about if the Cardinals took to the court. He said he doesn’t miss jump shots and hates that his game is compared to backup quarterback Matt Barkley. Here are some other takes:

Larry Fitzgerald: Good athlete but basketball game could be “meh”

Calais Campbell: Gives you everything defensively

Brittan Golden:  “A really good call” when suggested to him

The audience gets an inside look at what it’s like for an elite athlete to become a new dad midseason. Much of the episode highlights how Peterson balances his new life change but continues to play at a high level. While he is on the road, the Peterson’s have a plush doll of him so “dad can always be with her”.

That’s halfway through the series, and it’s been an incredible ride. Check back for episodes 5-8.