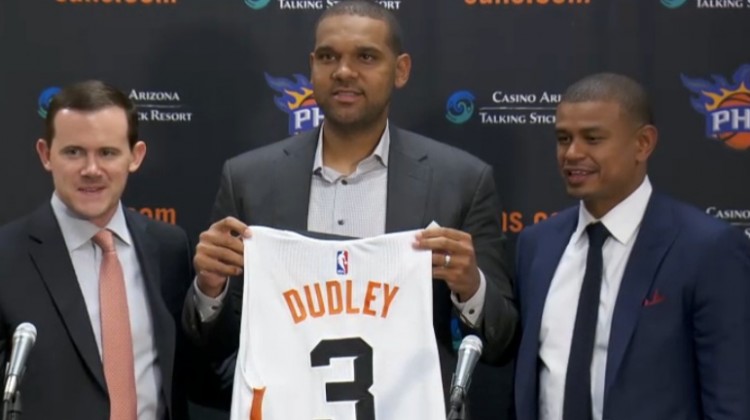 The place where a young 22 year old who was a throw-in involving a trade involving Jason Richardson coming to Phoenix, turned into an established NBA pro. Three years ago, the Suns traded Dudley in the deal that brought Eric Bledsoe to town and now Friday, they welcomed him back into town with the hopes that his spirit, work ethic and personality well help the Suns in their rebuild.

“It’s definitely an exciting time for me and my family,” stated Dudley at his introductory press conference on Friday. “I have secretly been wanting to come back here for years. We had a great experience here my five and a half years and I would say this, I don’t think there is a more perfect person for this job at this time with this team than me.”

Since leaving Phoenix, Dudley spent time with the Clippers, Bucks and most recently the Wizards before becoming an unrestricted free agent this summer. Dudley checked off a lot of the boxes in what the Suns wanted to add this offseason and when he learned this from his agent, Dudley wanted to make it work.

“When the Suns showed interest, it was something for me like ‘hey, that’s where I wanted to go,'” Dudley explained. “You always explain to your agent hey if everything is even or close, which team do you want to go to and for me it was easy, it was Phoenix.”

From the standpoint of the Suns front office, what were those boxes that needed to be checked? General Manager Ryan McDonough was eyeing a specific style of play and type of person. Dudley rose to the top of this list when looking at the free agent pool.

“In terms of style of play, we wanted someone who could stretch the floor,” mentioned Suns general manager Ryan McDonough. “Open up the lanes for our guards, someone who is unselfish who can move the ball and play with a point-five mentality which Coach Watson and his staff want to play with.”

McDonough mentioned that when this deal was coming about, he knew that it would go over well. But never envisioned the just how much positive feedback he was going to receive from his fellow Suns employes, fans and the media since news came down of the signing.

For new head coach Earl Watson, he played against the Suns when Dudley sported the purple and orange and knows having someone like him will add an extra coach and mentor-esk presence to help carry his own philosophies.

“He knows what it’s like to wear this jersey with pride,” stated head coach Earl Watson. “These guys were probably babies when they reminisce on a Steve Nash and Amaré. I remember playing here in the playoffs when playing for Memphis. Was nothing like it when I came into this Arena. So we want to bring back these memories with these guys and allow them to understand that he can help them on and off the court.

One of the biggest tasks Dudley will take on becoming most likely the teams’ starter at the four, will be teaching the position on and off the floor to 2016 first round draft picks in Marquese Chriss and Dragan Bender.

“First things first is you’ve got to lead by example,” Dudley explained. “Before I say anything, they have to see it.”

Dudley acknowledged he knows the Suns have dealt with tough times but believes they are in the past and there is no need to look back. What he does know is what this town is like when there is a team to be proud of on the hardwood every night and he intends to do what he can to ingest the life back into the Purple Palace.

“I’ve tasted how it was here during the Western Conference Finals,” Dudley said. “How this is a basketball town when you first get here. Me coming out of high school, college I’ve always been the underdog. So me coming here, it’s fitting. That’s why I say there is no more perfect person than myself to join this team right now. I am just excited to be honest with you.”