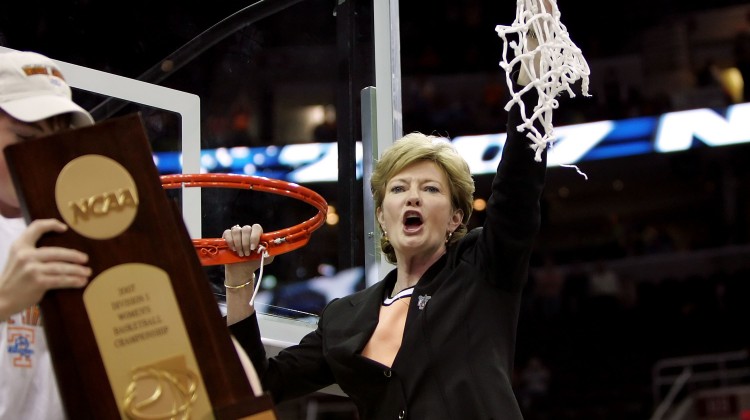 “There will never be another…”

It’s a phrase often tossed around when chattering amongst friends or overhearing local debates at offices or sports bars. At times it’s misplaced and frequently overused.

After winning the most games in Division I college basketball history, claiming eight National Championships, never having a losing record in 38 seasons and graduating every single one of her players at the University of Tennessee…

There will never be another Pat Summitt.

The basketball world mourned Tuesday when it was announced the 64-year-old lost her five-year battle with Alzheimer’s. Social media filled with adjectives like trailblazer, icon, ambassador, mentor, hero and legend. She was, in so many ways, the John Wooden of not only women’s basketball but women’s sports, as well.

Pat was not a GREAT coach because she won, she was a GREAT woman, leader , and coach who won! Thank U 4everything!

“She was constantly having a huge vision for the game and was way ahead of her time,” Arizona State women’s head coach Charli Turner-Thorne said in a phone interview with Sports360AZ.com Tuesday morning. “Like Coach Wooden…I know how much she’s impacted it. The success she had consistently brought so much media attention to the game. She was such a superstar that people wanted to follow women’s basketball.”

Her impact even stretched out here to the desert 16 years ago when Turner-Thorne and athletic director Kevin White reached out to Summitt and proposed a one-of-a-kind, first ever outdoor basketball game at then Bank One Ballpark.

“We were still building and growing and trying to become a national name,” Turner-Thorne said. “Obviously we weren’t the team to beat and the one to watch so we had to get one of those perennial powerhouses to play us to make it a huge event. She agreed to do it because it was great for the game…that’s who she was.”

Looking for another adjective to describe Summitt?