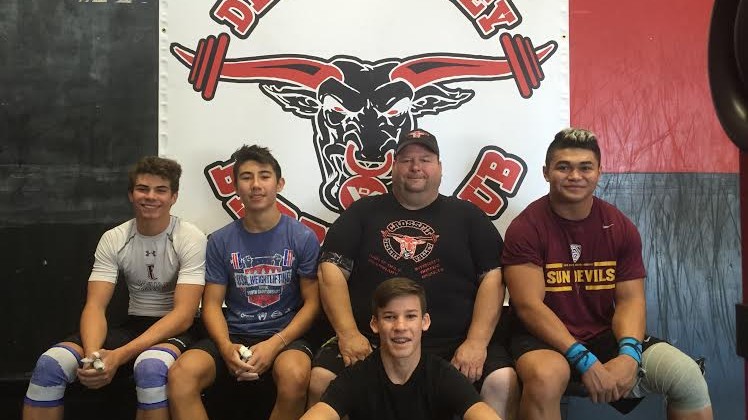 For Dennis Tan, Nate Cerwinske, Ryker Norton, Raulo Brown and Brian Strobel all of their hard work is about to be put to the test.

Ahead is road trip to Austin, Texas for Olympic Weight Lifting Youth Nationals begins this week and these lifters couldn’t be more excited for the opportunity.

The group of five train four days a week for two hours a day at Desert Valley Barbell Club alongside Coach Tim Baldry.

“I have a lot of belief in them,” Baldry told Sports360AZ.com after a recent practice. “I expect them to do well and they know that. Every couple weeks we add weight to their maxes, making them consistently stronger.”

Many of the boys started weight lifting to help them improve in high school football.

“I was looking for something to make me stronger and faster in football,” says Cerwinske. “I started Crossfit and then my coach signed me up for a meet and I liked weight lifting better so it took off from there.”

Cerwinske, an incoming sophomore at Skyline High School is expected to podium this year at Nationals. His personal record stands at 175 pounds for snatch and 230 to 240 pounds for clean and jerk. Baldry says,

“This year he’s [Cerwinske] going to clean and jerk right at 100 kilos,” Baldry said. “Almost doubling where he was last year.”

Tan, the 220-pound incoming senior from Queen Creek High School is eighth in the nation for his percentage in how much he lifts verse body weight for his age group.

Last year at Nationals Tan finished third in the clean and jerk, but this year he is projected to finish first.

“He’s set numerous Arizona state records but we hope this year he will have an American record,” says Coach Baldry.

During the weeks leading up to Nationals Tan has an eating regiment of two scoops of protein after every workout, omega three fish oil before bed and lots of spinach. It worked for Popeye and he hopes it’ll work for him, too.

“I plan to hit my max at my second [out of three] attempt,” says Tan.

His personal records are 265 pounds for snatch and 360 pounds for clean and jerk.

Many of the group are looking to continue weight lifting in college.

For Tan he hopes to make the Olympic team.

Watch live on USAweightlifting.com as these five lifters raise the bar and pursue their dream at Nationals on June 25 and 26.