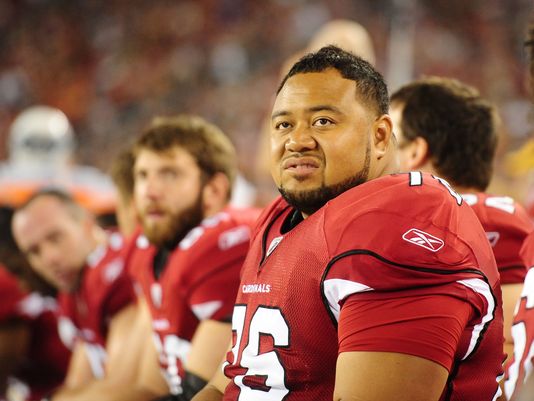 “From putting on the helmet, to now coaching, it is a family type atmosphere here at Mesa High,” Lutui told Sports360AZ.com in a recent phone interview. Latui’s cousin Kapi Sikahema was recently named Mesa’s head coach.

Mesa High breads a unique bond between the athletes and their coaches. It’s a family type tightness that’s woven deep into the Jackrabbits’ football tradition.

“It’s been a tradition at Mesa High [the family type mentality],” Latui explained. “I still keep in touch with some of my boys that I played with.”

Lutui’s football resume’ is an impressive one. Eight years in the NFL and receiving All-American honors while playing at the University of Southern California.

Throughout all the success Lutui credits his time in high school as, “One of the most influential times in my life,” says the former offensive guard.

“Even after being a national champion and playing at the super bowl, high school was a critical time to learn and develop that passion,” he shares.

As far as coaching a high school football team, Lutui says, “It’s always been a dream of mine.”

While at USC and during his time playing with the Tennessee Titans, Lutui picked up coaching skills from long-time coach Norm Chow. This offensive coordinator helped lead Lutui and USC to a national championship with the Trojans.

He hopes to make a difference in many of the student-athlete’s lives just like the coaches in his life.

“I had a special coach when I was a Mesa. Coach McKane took care of me. I was the kid who didn’t have the finances to go to camp or buy a pair of cleats,” Lutui said. “Coach was like a father figure to a lot of us. He taught us more about life than football.”

The relationships made during Lutui’s time in high school have withstood the test of time. Today he still keeps in touch with Coach McKane.

“I’m always at his house, in his fridge,” Lutui joked. “I walk in his house without knocking, so I’ve been a part of his family for a long time.”

Since retiring from the NFL in 2012, Lutui’s been doing some coaching roles. Most recently, last year he volunteered at Red Mountain High School and earlier this year he helped out at the University of Utah.

When asked if he eventually hopes to take a head coach position or coach college football he replied, “Absolutely.”

For Lutui, coaching this season at Mesa High is more than sharing his wealth of knowledge about the sport. It’s about paying it forward alongside a tight-knit family.