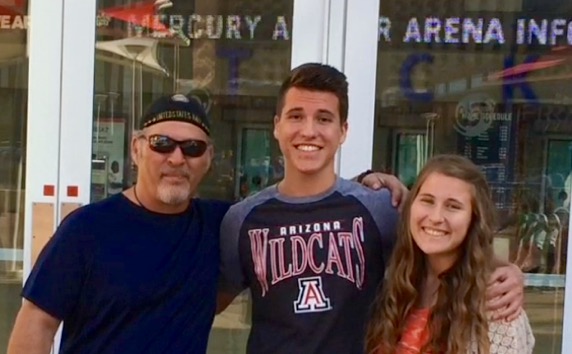 Photo: Esther Le Van with her Dad and Brother at Talking Stick Resort Arena on 6/12

For four years now, I have overseen the process of selecting the All-Academic teams here on Sports360AZ. It’s been amazing to see some of the incredible accomplishments some students in our state have had when you combine excellence both on and off the field/court.

This year, I had a first which would absolutely blow me away.

Weeks after the All-Academic Girls soccer team was announced, I received an email from a young lady named Esther Le Van from Chandler Prep who was among those who were named first team All-Academic with a 4.8 GPA. She wrote to tell me that it was “a privilege I do not deserve.”

Le Van in her email said to me that there was a miscommunication in regards to her GPA and long story short, her GPA was actually 4.1 (which is phenomenal) and not 4.8 which awarded her the first team selection.

“As much as I would love to have a 4.8 GPA, I am not the type of person to take credit for something I did not accomplish,” Le Van said. “Although I did not attain a 4.8 GPA at Chandler Prep, I did acquire integrity.”

She went on to explain that this is something that was really weighing on her heart since the announcement of the team.

“Somewhere in another school is a girl who does deserve the spot I have,” Le Van stated. “She has worked hard her whole academic career, and although I have to, she deserves this spot, and I do not.”

It just so happened that with Le Van brining this to our attention, the person next in line to move up into the spot that was initially hers was one of her teammates at Chandler Prep, Samantha Zilmer, who had a 4.76 GPA.

This deed did not go unnoticed. A person who works with the Phoenix Suns and Mercury learned of this integrity displayed by Le Van and this past Sunday, her along with her Dad and Brother were given tickets by the organization to attend their game as Diana Taurasi and Brittney Griner took on Elena Della Donne and the Chicago Sky.

I look up to Esther. We live in a time where sports has become a very harsh and cut throat industry whether you are playing or covering it for the media. Sometimes at the high school level, I wonder sometimes if the kids are even having fun playing whatever sport it may be with the pressure and outside forces in their ears. It is unbelievably refreshing to see a young woman in our community take action and not stop until everything was rectified. I told her in my reply to her and will say it again to whoever is reading this that I will pay if forward and I hope you will to.

People like Esther Le Van make this world a much better place.