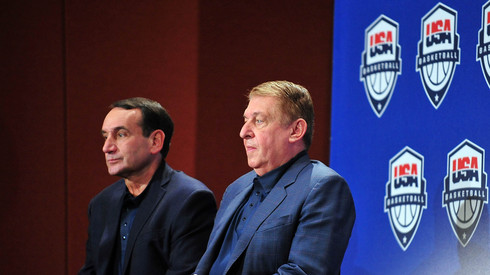 Whether it was Paul Westphal, Kevin Johnson or Steve Nash — Jerry Colangelo never had a problem finding excellent point guards here in Phoenix.

Team USA basketball’s point guard situation for the summer Olympics is far from a “problem” but Colangelo and head coach Mike Krzyzewski are re-assessing their backcourt after Chris Paul and most recently Steph Curry announced they would not be playing. Add Russell Westbrook to the list and you’re talking about largely considered the three best point guards in league not being in Rio.

“The point guard position which has been one of our strongest positions, has been a little bit decimated,” Team USA Chairman Colangelo told Sports360AZ.com’s Brad Cesmat during a phone interview Monday morning. “We still have other people who can slide in, slide up and some are going to get a chance [to play] who may have never had a chance.”

Colangelo is also waiting on LeBron James who said he will wait until the conclusion of the NBA Finals before deciding if he will play this summer. There have been whispers James may skip Rio to allow his body to rest and heal following the rigors of an extended season.

“What Coach K and I are doing are looking at rosters with him and without him one way or the other,” Colangelo explained to Cesmat.  “At the end of the day I still feel confident we are going to field a very strong team.”

The 2016 Olympic Basketball Tournament will take place in Rio from August 5-21.

Few surprised by former Suns’ rise to the top