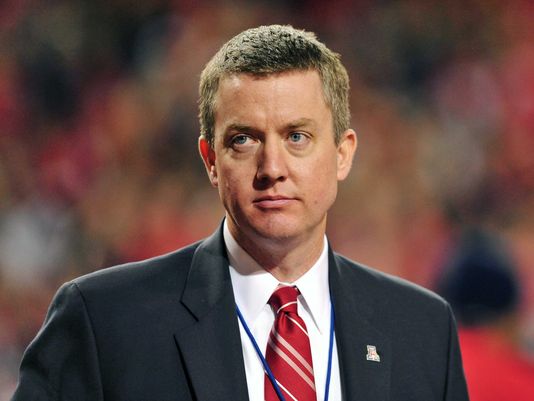 One of the biggest talking points around the college athletics landscape this summer is what the Big 12 is going to do with the expansion of their conference and if it is even an option. Last week, Brad Cesmat poised the question in a column that with the exposure, TV contracts, game start times and more, would it make sense for the Arizona schools to make the move out of the Pac-12?

Cesmat had Arizona Wildcats Athletic Director Greg Byrne in studio to discuss various topics around college athletics and posed that very question if a move is something that could make sense for his programs.

“We belong in the Pac-12,” stated Byrne. “That’s where we should be and we are proud of our partnerships with the institutions in our conference. The conference has had great success academically, athletically and socially and that’s a great thing to be a part of.”

Byrne stated that their relationship with the conference is positive and the meetings in Phoenix last month with the Pac-12 were very positive covering areas he believed they hadn’t as well before.

“We always look at things like how are we doing from a competitive standpoint and the structure of our conference and what we can do is an important part of that,” he explained. “We have made a lot of great strides the last several years and we cant take our foot off the pedal.”

A lot of the attention that conferences put a lot of resources into that last several years has been with TV contracts. The SEC and BIG Ten Networks have continued to grow while the Pac-12 is still dealing with some unpopular start times and a Network that is still not being picked up by Direct TV. When Byrne mentions staying competitive with other conference, the money being funneled in to universities from TV contracts could be one of those areas.

“You are paying attention to that, sure,” mentioned Byrne. “I wouldn’t be honest if I wasn’t acknowledging that. And at the same time too, the Pac-12 Networks from a programing stand point has been excellent. We’ve had a lot of really high quality programming, I know distribution is something we want to continue to work on, we know the market is changing and we hope we can be an important part of that.”

Byrne went on to mention that Dish Network informed him that Tucson was their leading city per capita for new subscribers which validates to him the value of the Network and the passion of the Wildcats fans.

Speaking of the Wildcat fans, the Arizona football program launched a big push for ticket sales this offseason with their #OurHouse campaign. Byrne discussed the support of the fans at Arizona Stadium and that one of their next steps as they look to continue to add resources to their programs is to continue to revamp the stadium.

“We made the change with the Lowell-Stevens facility and the north end zone and now we need to focus on the rest of the stadium,” Byrne said. “Actually what I would like for us to do, we are at 56 thousand and we average about 50 thousand. It”s that last six thousand that it is hard to get over the top with at times. I’d like to see us shrink capacity to about 50 thousand and go to individual chair backs, with restrooms and concessions…I don’t think it’s unrealistic to be at a hard sell out at 50 thousand.”

Arizona football kicks off their 2016 campaign in Glendale at University of Phoenix Stadium against BYU over Labor Day weekend.