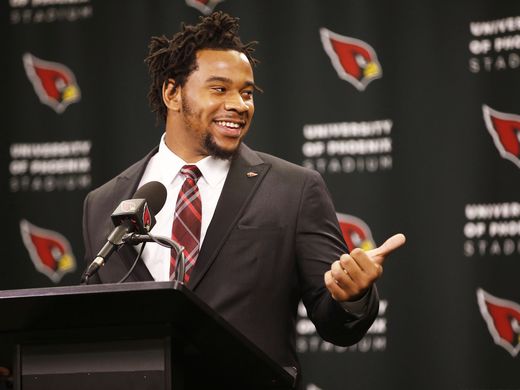 If you think the Arizona Cardinals are excited to have stolen a top-of-the-draft talent like Robert Nkemdiche with the 29th pick for exclusively for his defensive ability, think again.

Bruce Arians expects the rookie to contribute in more ways than one.

“Oh, he’ll be in our goal-line package,” the Cardinals head coach told Sports360AZ.com’s Brad Cesmat in an interview earlier this week.

It won’t be that much of a stretch for the Ole Miss product, who’s got history on both sides of the ball dating back to his prep days at Grayson High School in Loganville, Georgia.

“He was a premier high school running back and punt returner,” Arians said. “Ungodly athlete.”

Nkemdiche played a little offense in college as well, scoring three offensive touchdowns last season, including one receiving touchdown, and that’s all on top of his powerful defensive presence.

“He’s going to be a dynamite player for us for a long time,” Arians said.

What about the concerns that led to his precipitous slide down the draft board, allowing the Cards to pick him up as late as they did in the first round?

“All our research was done in the last two months,” Arians said. “He had a bad night. He admitted to it. Walked us through what happened. We were convinced it’s not who he is, it’s what happened.”

The Cards have a particular personnel quirk that helped them feel even more confident about the selection.

“We’re very lucky, because our owner is a prosecutor,” Arians said. “He knows what BS looks like, and he was very comfortable with Robert.”