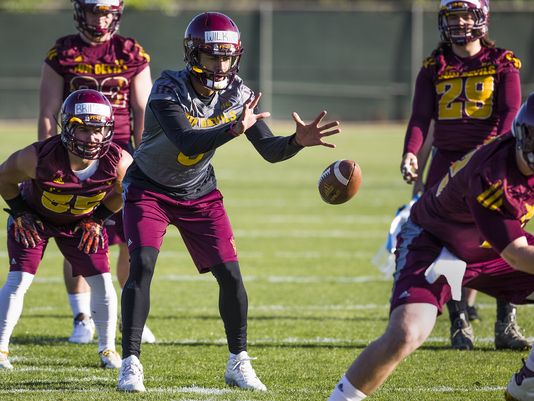 It’s here. The first signs of football. That dead zone in between the Super Bowl and the kickoff of college football, where there is nothing but basketball and baseball…shiver… is over.

While fans like myself are rejoicing, the Arizona State football team has serious questions that need answering before it heads into the 2016-2017 season and chief among them: Who is going to be the new quarterback?

I’m here to say the team isn’t losing a lot at the position. Here’s an inside look at practice and the frontrunner for the position.

Last year, senior quarterback Mike Bercovici, led the offense and team to a lackluster 6-7 season, and although Bercovici’s numbers looked good, there was more to the story.

He constantly made poor decisions or throws in critical moments that would ultimately be a catalyst to a loss. In addition, a large majority of his passing statistics came deep in the fourth quarter once a decent lead had already been established through the running game.

When you look beyond the numbers and get past the year-long hype about him, created solely by the “Jael Mary,” the team isn’t losing a whole lot at the spot.

This takes us to spring practice. There are three quarterbacks fighting for the starting spot, with a fourth set to join the competition in the fall. Offensive coordinator Chip Lindsey believes the competition will extend all the way to the Sept. 3 opener against Northern Arizona.

The most experienced of the three is redshirt sophomore Manny Wilkins, who has a massive stat line of 55 rushing yards and no pass attempts. Not much to work with, however he does have game experience and that could help give him a mental edge over his fellow competitors.

The other two are both redshirt freshmen: Brady White from Newhall Calif., and the hometown hero, Bryce Perkins, from Chandler.

Now, I could sit here and rattle off high school stats, or hypotheticals, but honestly that doesn’t really mean anything.

So, post stretching, the offense and defense went into an up-tempo scrimmage.

The offense moved well enough down the field through the few drives he was in. The first play from scrimmage, he took a read option up field for about 10 yards, which is a sight for sore eyes, a Sun Devils quarterback keeping the ball on a read option.

In addition, he was allowed several pass plays, some were accurate and had good timing, others showed that chemistry between line, quarterback and receivers is still a work in progress. All things considered, he looked liked he could man the offense with a little more practice.

Next in was No. 5, the 6-5, 190-pound veteran of the group, Wilkins. The offense seemed to display more consistency and moved with much more efficiency. It wasn’t a well-oiled machine by any means, but it, and Wilkins, flashed massive potential. There was also an evident leadership role assumed by Wilkins while he was in there. He seemed to move with a purpose when calling the plays at the line. It showed that perhaps that minimal game experience does provide him a small edge.

Finally came No. 2, the 6-2, 200-pound White. Much like Perkins, White showed flashes of being able to run the offense, but also displayed his youth, missing a few passes throughout his time in. It was neither a standout performance, nor a damning one.

From the team portion, the quarterback broke into individual drills, where they began to warm up a bit more. For the most part it was an unremarkable period, but the one thing that did stand out was how quick Wilkins’ release was, in addition to the amount of zip that was on the ball when it left his hand.

The quarterbacks also worked on their footwork, the most essential part of playing the position. Many people believe that the throw starts from the arm, but in fact the throwing motion, accuracy and velocity of the ball all start from the feet.

As far as quickness went, the dual threat quarterbacks, Wilkins and Perkins, had a slight edge over White. However, as far as setting up, getting the drop depth correct and stepping to the right spot, I would give White a slight advantage.

So, what did I get from it all?

Wilkins does seem to be the most well-rounded quarterback of the three, but not by much.

Perkins appeared to be the best runner.

White probably has the best mechanics as far as feet and a high release point for the ball.

When coach Todd Graham said the position is anyone’s for the taking, he means it.

It isn’t just coaching rhetoric, it really could go to any of the three in camp.

If I had to name a starter from just watching 30 minutes of that practice I would go with Wilkins. He seemed to be the most-well rounded and appeared to have more leadership and a better grasp on the offense.

It will be an interesting story line to continue to watch and see which quarterback can distinguish himself as the starter come Week One as the Devils charge out of the Tillman Tunnel to play NAU.