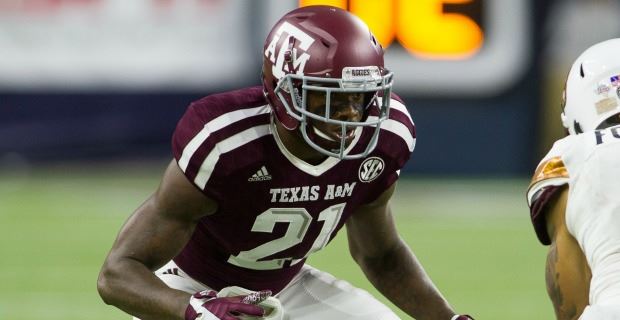 Steve Keim and company were very pleased with the second day of the 2016 NFL Draft. He began his press conference Friday night pumping up his “second round pick.”

“Coach and I, Michael (Bidwill) probably have never been so excited about a second round pick. A pro bowler with 12.5 sacks” joked Keim referring to Chandler Jones who they acquired for their second round pick.

In reality, Cardinals had just one pick during day two of the NFL Draft and the focus stayed on the defensive side of the ball. They used their 92nd overall pick in the third round to select Brandon Williams who is a defensive back out of Texas A&M.

“The one thing that excited us about him aside from his physical tools, was the excitement and passion he has for the game,” explained Keim. “He was a team captain and when we talked to John Chavis, Kevin Sumlin and all the people on the campus, there was no question that he was the team leader. A guy who was a vocal catalyst for the Texas A&M team this year.”

But that just tells a small part of Williams’ story.

Williams was a running back when he got to college and had never played on the defensive side of the ball at all until this past June going into his final season at Texas A&M. He was originally a five-star running back and started his career as an Oklahoma Sooner. He happened to be teammates with current Cardinals safety Tony Jefferson.

@DaSlimC welcome to the desert Brodie !

While at Oklahoma, his first child was born and transferred to Texas A&M to be closer to his daughter and family.

The notion of moving from offense to defense came about back during spring ball of 2015 when Defensive Coordinator John Chavis first arrived coming from LSU. Seeing as he had 4.3 speed, the offensive didn’t want it to happen. But over the Summer, Williams had a meeting with Sumlin about the move to defensive back.

“The only words I heard were ‘compete’ and ‘start,'” said Williams. “At running back, we were running back by committee. So I wanted to start and I wanted to have an impact on the team some way, some how…At the end of the day, I love to play football and I have confidence in myself that I can play anywhere.”

“It was super hard,” added Williams of his transition to the new position. “With the technique, it’s still hard and I am still learning.

In the end it was a great move for him as he did start and did compete enough to get on NFL radars like the Cardinals to select him in the third round. Bruce Arians and Steve Keim noted that he is raw with his like of experience at the position, but there are intangibles and a mindset he has that make the Cardinals ecstatic to land him.

“The thing he does is play press man to man,” said Arians. “He will be an immediate impact player on special teams.”

“So many of these corners are shorter, slow-footed guys who struggle and have to play inside in the nickel,” mentioned Keim. “Here is a true guy with length and athleticism who can play outside and do all the things we ask our corners to do in this defense.”

So the Cardinals address a need as well in adding depth to their corner back position. The question is if they will still look to add another veteran in addition Williams.

“Adding young fast players will help us and I don’t see us really needing one,” stated Arians.