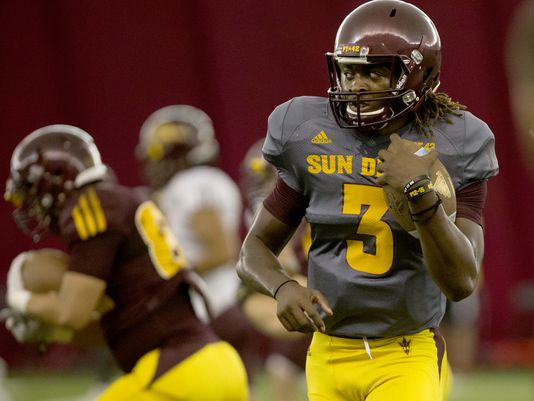 If there’s one person not in Tempe who’s most qualified to project the Arizona State Sun Devils’ impending quarterback battle, it might just be Taylor Kelly.

After spending four years with the team, three as a starter, and amassing the school career record in total yards, Kelly spent last season as a graduate assistant working with quarterbacks and the scout team.

Bottom line: This guy knows Sun Devil quarterbacking inside and out.

So what does Kelly see developing under the lights of the Dickey Dome this summer?

“They’re unbelievable people,” Kelly told Sports360AZ.com’s Brad Cesmat Monday about the trio of Manny Wilkins, Brady White and Bryce Perkins. “Human beings that just love competition, love the game of football, love to just go out there and have fun on the field. I’ve had a privilege to be with Manny for two and half years and the other two just for the year, and I’ve learned so much about them as people and just how they love the community and go out and serve, and they put the team first. That’s one thing that’s going to make these guys leaders. And they have many similar aspects but they’re so very different.”

Kelly, who left his position with the team for a new opportunity as a quarterback coach at Edge QB Training in Southern California, sees positives in all three players.

He talked about Wilkins as an unpolished but explosive talent.

“Manny’s a real playmaker guy,” Kelly said. “Whenever he has the ball in his hands, he expects to score. He’s very talented with his arm, his legs, he’s so loose and fluid up top with his body that he can make guys miss and make any sort of throw that you put him in. That’s one of his advantages, but going to the other side of it, is he can have the ball and you can be like ‘oh no what are you doing’ and then he goes and scores. So he needs experience, but he’s only going to get that by playing. Being in a game situation – that’s a way that he’s going to grow and learn.”

Kelly described White as the most fundamentally sound of the three.

“Brady, he’s very confident in himself,” Kelly said. “He has a lot of mechanics that are polished. He’s smart in the classroom. He’s a competitor, but he’s not so much going to give you a hoorah speech, he’s just going to have his actions get the guys to follow him. He brightens the room up, he’s polite and gets the whole team to follow him.”

Coming from Kelly, the former Chandler star Bryce Perkins may have the highest hill to climb to earn the job, but if he gets there, it’s possible he could be the most impressive of the three.

“Bryce has that ‘It’ factor,” Kelly said. “Just being around him the last six months, he’s grown so much in the classroom. Understanding things, taking the notes in the classroom when ‘Berc’ [Mike Bercovici] was talking in meetings, just picking up on little things.”

Kelly explained that the scout team role for Perkins and White was an obstacle to their short-term development, but that both guys impressed in spit of it, Perkins especially.

“When you have scout team of Brady and Bryce, you’re not much of a part or role in the meeting room because you have to leave right at the beginning of it, maybe thirty minutes in to learn the scout team. So for them to really grow that way, they have to go out on their own and do things. And I really saw his growth in that, so that tells me he was doing extra stuff to grow and be a better football player to help this program. (Perkins is) a special player. “He took Chandler to a state championship, so I’m really excited to see what he can do in spring.”

Notoriously humble, Kelly’s take on the trio compared to him was easy to anticipate, but would be exciting for Sun Devil fans if accurate.

“They’re talented, more talented than I was without a doubt,” Kelly said. “It’s just who’s going to grow and focus on themselves and their team to make them better. That’s where I focused on when I was in this competition four or five years ago. I just focused on me and how am I going to get all ten other guys on the field and all 115 players better around me and grow that relationship. Whichever one of those quarterbacks does that will win the job.”

So, all that said, Sun Devil fans want to know… who’s it going to be?

“It’s really close. It’s so close that it’s going to be really really tough. Coach Graham he’s going to do the same almost exact to the t grading-wise and evaluation-wise. Once those numbers hit, and all of those calculations, then he’s going to put it all together and that’ll separate it.”