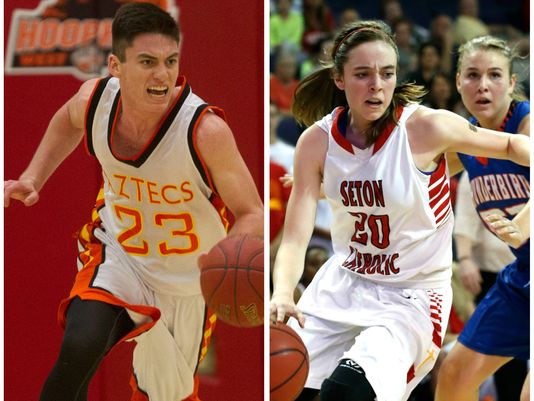 Since 2011, there’s been only one year where there wasn’t at least one state champion living in the Barcello house.

From the oldest sister, Julia, who won three championships with Seton Catholic and now plays at Colgate, to brother Alex, who’s got two titles already and is hungry for his third this coming season, to younger sister Sarah, who won her first this month with Seton Catholic, the Barcellos have dominated upper-division high school basketball this decade.

With Sarah having just completed her sophomore season and a youngest sister still in seventh grade, that domination might continue for years to come.

Today, there’s only one champ in the house, and it’s Sarah.

“It’s amazing,” Sarah told Sports360AZ.com. “It’s hard to describe because I’ve never felt it before, but it’s great to see that all the hard work has finally paid off.”

Alex’s Corona del Sol team was upset early despite entering the tournament as the top seed. This year the roles were reversed, and he had to watch his sister win.

“(It was) bittersweet,” Alex said. “I was happy for her but it was really hard on me because I wished that I could’ve been playing in that game at 8:00.”

So how does a reigning champ treat a disappointed older brother who’s never lost before?

“Yes I have given him a hard time before,” Sarah admits, laughing. “I’ll just say ‘sorry who won this year?’ It’s very competitive.”

Alex said he can relate to a member of another “first family” of their sport: Eli Manning. He said his reaction to Sarah’s championship, mixed with enormous pride for his sister, was much like Eli’s at this year’s Super Bowl as he watched his brother Peyton win.

“It was hard on me just because, being in the Corona del Sol basketball program we aren’t used to losing,” Alex said. “But I’m really proud of my sister and what she accomplished.”

Alex has one more year left to follow in older sister Julia’s footsteps and capture three titles in a high school career. And just like Alex, Julia lost her junior season.

“She came back with a vengeance her senior year,” said father Edward Barcello. “And Alex I think is just like that, where he wants to do everything possible to come back and win one his senior year and go out on top like Julia did.”

Edward, set apart from the sibling rivalry, was able to enjoy Sarah’s championship with more of a fullness of joy.

“We were very happy for Sarah,” Edward said. “Last year, this whole role was reversed where Alex won last year and then Sarah lost in the state title game. And it was devastating for her because she had seen her two siblings win, and win often, and she wanted it so bad. And for her to go through that and the roles are reversed, where she got to experience it and get a championship, but then Alex obviously for the first time experienced losing and not getting that.”

Alex, of course, has plenty going for him. Besides the chance to overcome his first season without a title before leaving school, he’s got an incredible future ahead of him after that season ends.

Recruited by 10 of 12 Pac-12 schools (per ESPN.com), as well as programs nationwide including the likes of Notre Dame, Oklahoma and Virginia, the standout point guard will have the chance to continue his career at the highest level available.

But coming in right behind him, unsurprisingly, is Sarah, whose own recruitment has begun heating up in the last year. Edward reports she’s got interest from big nearby schools like Arizona State and Oregon State, but also from top academic institutions like Princeton and Yale.

“I want to play at the highest level possible,” Sarah said. “I love the competition and I have a huge love for the game.”

Edward manages the recruiting for his children, especially during the season, so they can focus on what he terms higher priorities.

“Sometimes it can be overwhelming for my children so I kind of step in and try to help,” Edward said. “Like with my son who’s being recruited by a couple dozen schools, and now my daughter is being recruited by a lot of schools all of a sudden, after this year, she’s kind of got on everybody’s radar. So I help them with that part of it. Especially during their high school season I want to do as much as I can for them and talking to the coaches and handling all that, and then every now and then they’ll say hello, but I try to tell them they’re focused and they want to do as best they can.”

But that’s the future. For now, Sarah and Alex both said they have work to do. It’s a long offseason, but it’s a chance for both star players to improve their games even more.

Alex, who’ll be playing with the Oakland Soldiers of the EYBL this Summer, said he tries to do as much as he can to help his little sisters get better.

“I try to just to keep them tough,” Alex said. “I know boys and girls is a lot different game-style, but I know if they can be tough they’ll be the best girls basketball player on the court, and that’s what I want them to be. I want their dreams to come true.”

An extra ordinary championship Saturday for one Arizona family

With Benson gone, Barcello prepared to take the wheel