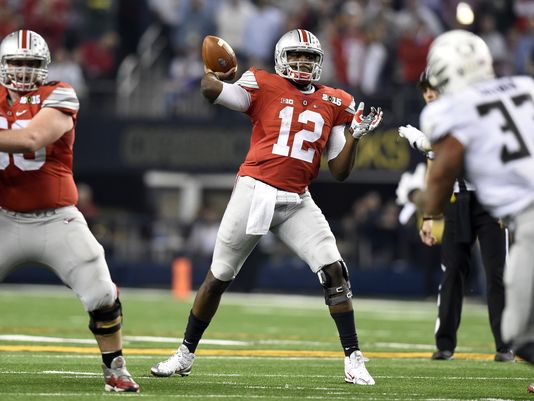 It’s no secret finding Carson Palmer’s long-term successor is a priority for Steve Keim, Bruce Arians and the rest of the Arizona Cardinals’ braintrust.

Most believe the Cards could be on the cusp of a Super Bowl run this fall and feel comfortable with their depth behind Palmer after re-signing veteran Drew Stanton in early March.

Per usual, there are a handful of quarterback prospects available in April’s draft but one analyst believes none fit the Arians’ mold like Ohio State’s Cardale Jones.

“From a pure physical skill-set I think Bruce Arians would be very enamored about what that kid brings to the table,” ESPN college football analyst Brock Huard told Sports360AZ.com’s Brad Cesmat in a phone interview Thursday morning. “He’s visiting and he’s probably on their board later in the draft.”

What most intrigues Huard about the former Ohio State signal-caller, who helped lead the Buckeyes to the 2015 College Football Playoff National Championship, are his measurables.

“He’s got a bazooka of an arm,” Huard explained to Cesmat. “The fact that he could vertical jump 35 inches at the Combine at 255 pounds tell you the caliber of raw athlete that you’re dealing with. I mean, he’s super special…he’s got more football sense than Logan Thomas who they drafted out of Virginia Tech.”

Jones is projected by many to be a mid-round pick and there are red flags like his lack of accuracy on short throws but despite throwing only 270 passes in his three seasons in Columbus he proved to play his best when the lights were brightest.

“He won huge games in huge moments,” Huard said. “There is a lot to like.”

The Cardinals have scheduled a private workout with Jones.