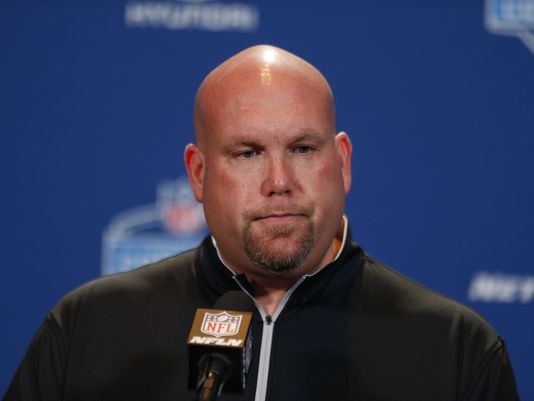 INDIANAPOLIS–There’s no question Carson Palmer is the Arizona Cardinals quarterback of the present.

I asked Steve Keim here at the Combine about his quarterback room, top to bottom.

“Even though Carson didn’t play particularly well the last game, last two games, I have a tremendous amount of faith and trust in him,” Keim said.

Palmer struggled in the Cards’ two playoff games, throwing six interceptions and making some questionable throws. Keim doesn’t seem overly concerned. “I had dinner with him the other night. He’s rejuvenated, he’s ready to roll. The longer he’s in Bruce’s offense he’ll get better and better.”

As with any position on the roster, the Cardinals have to evaluate the quarterback room.

“It’s no secret that position is hard to find,” Keim said. “It keeps guys in my position up at night because you do realize that you have to find the next guy (QB). It’s the cold, hard, reality.”

Keim emphasized Wednesday the team organization is still high on steady backup Drew Stanton but the jury is still out on Matt Barkley who came over in a mid-season trade from the Eagles. The organization didn’t get a feel for Barkley’s skill-set since he didn’t play any exhibition games in Arians’ offense.

The top of the quarterback draft class here in Indy doesn’t figure to come into play for the Cardinals. Carson Wentz from North Dakota State, Cal QB Jared Goff, Paxton Lynch from Memphis all figure to go in the first round in late April. There are quarterbacks later in the draft like Michigan State’s Connor Cook, Dak Prescott from Mississippi State, Trae Boykin from TCU and Penn State’s Christian Hackenberg along with several others who will be on display for the Cardinals to see.

Keim believes in letting the process play itself out leading up to April’s draft.

“There’s no doubt that we need to address that position moving forward but you can’t force the pick.”