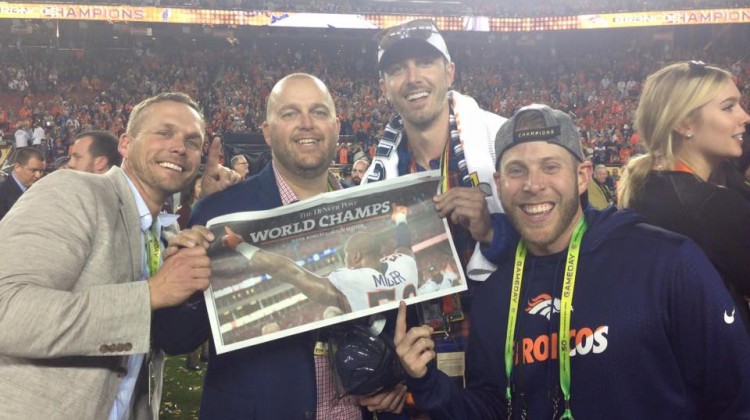 Though an Arizona team did not make Super Bowl 50 in 2016, there were still plenty of connections to our state that were prevalent in the game.

Of course, back-up quarterback Brock Osweiler and defensive back Omar Bolden quickly come to mind as they are Arizona State alums but there are a couple more behind the scenes that got their football starts in the Valley as well.

Coming from Chaparral high school both on the football field as players and also as coaches are two members of the Denver Broncos scouting department. Darren Mougey played quarterback at Chaparral until 2004 before going to San Diego State were he excelled at the wide receiver position. He is now a Scout for the Broncos.

In addition, another 2004 graduate of Chaparral is Bryan Chesin who played defensive back for the Firebirds. He later was named an assistant coach on Charlie Ragle’s staff as a defensive backs coach. Chesin is now a Player Personnel Assistant for the Broncos. Both former Firebirds now will be the proud owners of a Super Bowl ring.

“I don’t really know how to describe it,” Chesin told Sports360AZ. “At the time when I was at Chaparral and we won a state title, it was the coolest feeling in the world. It’s a different perspective now and just as great of a feeling but now on a bigger scale. It’s crazy to make sense of it.”

Chesin’s job over the course of the season was to do a lot of player evaluating at the pro level on other teams and some on the college side as well. Once Super Bowl week arrived, the scouting department’s work was done for the time being and Chesin was able to take in a week of being a part of the Super Bowl.

“Working in scouting is different than coaching,” Chesin explained. “There is not as much day-to-day work. So last week, I was at practice and had the opportunity to take a step back and enjoy everything in the moment. Went out to dinner, saw the city and talk about the whole process. It was really cool to experience it all from this perspective.”

From Chesin’s eye, he was confident the team would perform in the dominating fashion that they did just based on what he saw out of them in practice every day.

“If you were to ask me on friday night the way we looked being five point underdogs, I knew were going to win,” Chesin stated. “Based on the preparation and how good we looked. Seeing the outsiders point of view, they had no idea. No one realized how good we were at each position on defense.”

Once the game was over and the Broncos were Champions, Chesin and Mougey were able to hoist the coveted Lombardi Trophy and the excitement for them poured in via text, emails and social media posts.

On Tuesday, the Broncos returned to Denver to over a million people for their Championship parade. Chesin mentioned who surreal it was to ride through the city and that many people. It felt like an out-of-body experience.

“First you get texts from your friends and family and then you sit on the truck, look out and there is no end of people,” said Chesin. “You see what a million people look like from your own eyes. It’s borderline crazy. It was an unfathomable amount of people and a moment that I will never forget.”

Chesin mentioned that his former boss who gave him his start in coaching, Charlie Ragle who is now at the University of Arizona, reached out to his former Chaparral guys.

“We spoke via text and he congratulated us,” Chesin mentioned. “He’s like a big brother and it meant a lot to hear from him. We discussed how far we have all come and who would have thought this is where we would be back when we were on the Chaparral sidelines.”

The Broncos will have a few weeks off with the season just coming to an end but it wont be long before the Scouting Department dives right back into their work with the NFL Scouting Combine coming up in two weeks.