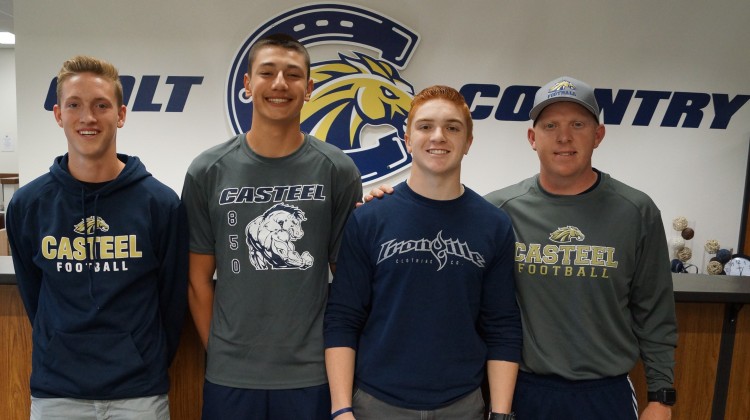 Caste High School opened in July 2015 with an enrollment upwards of 900 students, all of them in grades 7-9. The Colts fielded only a freshman football team during their inaugural season and under normal circumstances would not field a varsity team until the 2017 season.

But when head coach Spencer Stowers was hired at the Chandler Unified School District school a year ago this month, he knew he would have a decision to make as a result of the AIA’s decision to realign conferences and regions after one-year, not the typical two-year block.

One option was to play a JV schedule for the next two years, thus causing the current freshman class to miss out on a varsity season since they would be seniors before the next realignment and scheduling block took place.
It turns out that option was never a possibility.

Instead Stowers and his staff chose the other option, which some believe may be unprecedented in Arizona high school football.

“That (a two-year JV schedule) wasn’t going to happen,” Stowers told Sports360AZ.com. “We (decided) to get in a varsity schedule with sophomores.”

“There was no way we were going to miss out on the opportunity for this freshman class to play a varsity schedule when they’re juniors,” he added.

The Colts’ varsity team is expected to include exclusively sophomores, although Stowers says there are some incoming freshmen who could make the team. With an estimated 150 players in the program next year, the Colts will also field a JV team and a freshman “B” team.

There will be options for coaches and players as to which team the players will be assigned.

“Any sophomore (to be) or any (incoming) freshmen on our campus has an opportunity to play a varsity football schedule,” Stowers said. “If they’re a freshman they’ll have four years (of varsity experience), if they’re a sophomore they’ll have three.”

Casteel will play a 10-game varsity schedule in 2016 as a 3A Conference member after petitioning up from 2A, where it was originally placed by the AIA.

Stowers said the school chose to move up conferences because it anticipates being a 4A Conference member for 2018-20 scheduling block. He wanted his team to compete against teams closer to that level.

For at least the next two years the Colts will be in the six-team Metro Region, which includes ASU Prep Academy, Fountain Hills, North Pointe Prep, Valley Christian, and Yuma Catholic.

The 2016 schedule features five games versus region opponents, in addition to games against Globe, Empire, Payson, Odyssey Institute, and Kingman. Six of the 10 teams on the schedule finished .500 or better last season, including two that reached the playoffs – Yuma Catholic and Payson.

“There’s definitely some challenges,” Stowers said of schedule. “I do think there are some areas where we can excel, but every single day we have a mindset that we’re going to compete our butts off. Our goal is to be a playoff team with sophomores.”

Stowers was asked what gives him confidence that this group of sophomores can compete and be successful at the varsity level.

“One is their work ethic and the fact that they show up at 6 a.m. every morning to work,” he responded. “They show up and are involved in a very strenuous and difficult strength conditioning program.”

“We also have great numbers to withstand a varsity season and that is what’s most important to make the playoffs down the road.”

The Colts’ players are excited about the prospect of playing a varsity schedule.

“It’s a big opportunity,” said Jaren Rucker, a projected starter at outside linebacker. “We’re (going to be) sophomores and we have three years to make a name for ourselves and our school. Players on other teams might only have a chance to play one or two years on varsity.”

Stowers already listed a goal of making the playoffs, but the list didn’t end there.

“I want (us) to play fearlessly against teams with varsity players older than us,” said Luke Musselman, the Colts’ “Will” linebacker and defensive captain. “Play fearless and hopefully a lot of shutouts.”

Already precocious, perhaps the Colts will be prophetic too.