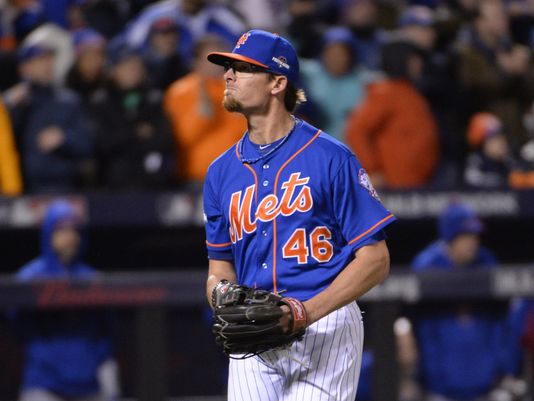 The Diamondbacks continue to prove they mean to win now with another bold but possibly questionable move.

Arizona made a big grab in free agency Monday, acquiring a likely candidate to be their new closer in Tyler Clippard for a reported two years, $12.25 million.

Clippard immediately becomes the most accomplished reliever in the D-Backs’ pen, nudging aside Brad Ziegler, whose lackluster strikeout numbers have always made him a bit of a square peg for the round “closer” hole.

Clippard’s k-rate over his career has hovered around an excellent 10 strikeouts per nine innings (k/9), putting him in the category of consistent relievers like Wade Davis, Drew Storen and Fernando Rodriguez. But it dipped last season to a middling 8.11 k/9, likely in part as a result of his fading velocity, which continued its three-year downward trend.

Clippard is an extreme fly-ball pitcher. 60.6 percent of all balls in play last season, the highest in the majors among pitchers with at least 30 innings, making Clippard in many ways the polar opposite of Ziegler, whose absurd ground-ball rate (72.8 percent, the second highest among the same group of pitchers) has kept him viable in spite of his unimpressive strikeout rate.

The question is how that will play in Chase Field, a hitter’s park that can gobble up fly-ball pitchers if they’re not careful. It’s hard to find a comp for Clippard, whose fly ball rate last season was off the charts, but suffice it to say that Clippard is a risky choice for a team that so recently whiffed with Addison Reed, another high-strikeout, high-fly-ball pitcher, in the closer role.

2014 was probably Clippard’s best full season, as he posted a 2.18 ERA, 10.49 k/9 and a career-best 2.75 FIP, an advanced metric that measures how well a pitcher performs with defense taken out of the equation. But 2015 was arguably his worst. A 2.92 ERA is neither bad nor his career worst, but his peripheral numbers, a career-worst k/9 and a career-worst FIP of 4.28, paint a picture of a pitcher that was performing closer to Tim Lincecum (the 2015 version) than to Madison Bumgarner.

Clippard’s numbers are also not particularly ameliorated by the parks he played in last season. Between O.Co Coliseum in Oakland and Citi Field in New York, Clippard was favored with the 16th- and 28th-least hitter-friendly parks in the league (according to ESPN’s 2015 park factor tracker), so it more likely stands to reason why his poor peripheral numbers failed to drag down his results more than they did.

Chase Field, meanwhile, is eighth-most hitter-friendly park in the league.

None of this is to say that Clippard was a bad signing. It’s very possible that last season was just a down year for the righty, and D-Backs fans wouldn’t be unreasonable in hoping for a bounce-back. But after eight seasons since his major-league debut, the numbers portray a pitcher whose best years might be behind him, and whose extreme tendencies might not play well in his new ballpark.