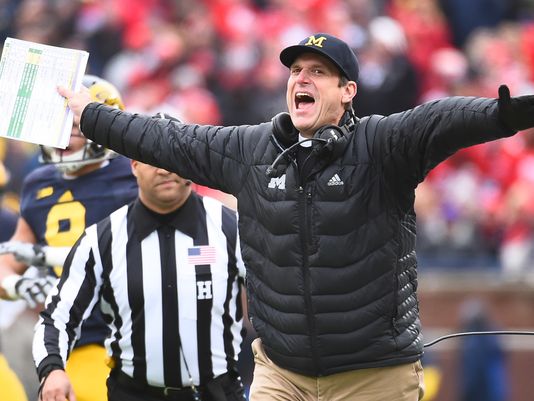 Jim Harbaugh is at it again. The button-pushing, conversation-starting, relentless leader of the Michigan Wolverines has the world of college football flipped on its head during arguably the quietest month of the offseason. Michigan football is moving south.

Last year, a hot topic throughout the summer was his use of “satellite camps,” an 11-day tour around the United States where his coaches and support staff held football camps for high school athletes. These camps were intended to take Michigan to people (who are we kidding… take Michigan to recruits) who might not have the means to get to Ann Arbor for an unofficial visit. At the time, ACC commissioner John Swafford said, “such camps were an unhealthy part of the recruiting process.”

I called “such camps” fair game. Michigan isn’t a talent-rich state when compared to Florida, Alabama, Georgia or California. If it gives potential recruits an opportunity to be seen, which in turn could lead to a college scholarship, then I am in full support.

However, this year he has gone too far. Harbaugh’s grand plan in 2016 is to take his football team 1,200 miles south to the IMG Academy in Bradenton, Fla., for the first four practices of spring football. Those practices will span the entirety of the Michigan’s spring break.

This is not how most universities operate, Arizona State for example, stays home for spring ball, as do a majority of college teams.

“In my opinion, I’m not in agreement with taking our student athletes away for a week [and] negating their spring vacation,” he said. “Hanging out with their friends, getting a week away, if they so desire, is a big part of the college experience.”

He believes there are better ways to go about differentiating practice time.

“I, personally, like our model better,” he said. “We take our football student-athletes away for a week during camp up to Camp Tontozona during the summer. It breaks up the monotony of camp and provides our kids with a great atmosphere to team build and be in a terrific setting without crossing lines.”

There are several problems with Harbaugh’s plan:

1. IMG Academy is a boarding high school that happens to house several top recruits that will sign in February of 2017.

Dylan Moses has been sought after since he was in eighth grade and is currently ranked as the top recruit in the country. Shea Patterson, who recently signed with Ole Miss, left IMG as the top-ranked quarterback in the country. The type of face-to-face interaction that is bound to take place between Michigan coaches and coaches at the IMG Academy should be considered illegal in a time that is considered a “quiet” by the NCAA. Quiet period is a time between February 5th and April 4th that prevents any off-campus contact or viewing of prospects. Surely, Jim Harbaugh and Co. are smart enough to avoid contacting recruits during this time, but it doesn’t say anything about interacting with the coaches of these recruits.

According to its website, “IMG manages the careers and brands of the world’s most famous sports and entertainment figures.” One of the clients pictured on its sports site is Harbaugh’s former quarterback with the San Francisco 49ers, Colin Kaepernick. With all the scandal that seems to always surround agents’ relationships with college athletes, do you really want to take your team and park it in an agency’s backyard?

3. What is it going to look like when one of his players inevitably breaks curfew, gets in trouble and makes the news?

4. Do we really want college football players to be treated like pros?

Harbaugh is from the NFL. He came five yards shy of winning the Super Bowl. He thinks like a pro. The problem is, he’s not coaching pros. He’s coaching people who have obligations that exceed their duties on the football field. Unfortunately, college football has already become a year-round sport. Players arrive at the end of May for summer conditioning. They remain on campus all summer only to go straight into fall camp. Fall camp is a nice appetizer for a season that can extend to mid-January thanks to the College Football Playoff (which I love regardless of how long it goes).

Upon finishing their Bowl game, they almost immediately begin winter workouts. Spring ball starts and finishes, then its back to the start of the summer. Give the kids a chance to be college students. Let them go home; let them vacation; let them get away from the football field; and let them have spring break.

My brother, Greg, played quarterback at Alabama, leading the Crimson Tide to a national title in 2010. I saw him three weeks a year. One of those weeks was during spring break. I hope Harbaugh understands what he is taking away and that there is much more to life than football. Especially when you’re a college student.