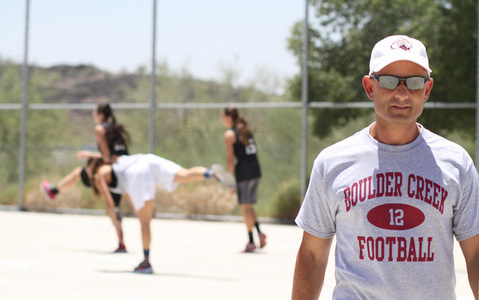 A unique place like Anthem creates a unique set of needs for its high school football program. Tony Casarella is a man with a particular understanding of how to meet those needs.

“Everything centers around our sports up here,” Casarella said in a recent interview with Sports360AZ.com. “And it’s a great time on a Friday night. Everybody comes out and we have great parents, but the community is very demanding. They want our kids to be coached the right way. They want us to play the game the right way and I think it’s great. They hold you to a high standard and a high level and that’s what we’re all about here. We’re all about raising the bar and playing at a very high level.”

Casarella, the new head varsity coach at Boulder Creek, knows Anthem, and he knows Boulder Creek. He’s been there for 11 years as the head track coach and has coached every level of football below varsity, until now. He’s also been the head strength and conditioning coach.

He worked under longtime head coach Dan Friedman, then stayed on the staff under Brandon Willard. When it was time for a change, Casarella was ready.

The long-tenured Boulder Creek employee has an acute understanding of the culture of his community and believes it is indelibly intertwined with the football team.

“We feel that the culture of the football team kind of sets the tone for the school, and what we try to do is create a culture that is character-based, lots of discipline and lots of unity,” Casarella said. “And we want the athletes to act a certain way and do the right things. Help when people are in need, have good manners, use good language. Those are the kind of things that we really like from our kids here. And we feel that if we can really cultivate that culture with the football team, that everyone else falls in line with that.”

He’ll take over a team that disappointed on the football field last season, going 1-10 in only the second losing season of the last eight years. While there are big expectations to live up to, Casarella feels confident he’s prepared to be the coach his community needs him to be.

“The good part is a lot of people know my style up here because I’ve been here for a long time, and I’ve coached a lot of these kids since they were little kids through camps and track team and I’ve been a part of this football team for so long, so everybody kind of knows my style,” Casarella said. “They know I’m a disciplinarian and I’m going to hold the kids accountable and make sure that there’s consequences.

That’s kind of the backbone of what I’m doing here. I’m here for the kids, I’m here to teach them how to be great kids, have good character, and I’m going to hold them to a certain level. And I think that’s something that the community embraces.”

Though the town expects the team to win football games (“It’s really all we have going on up here,” Casarella said), there are bigger, more important goals than wins and losses.

“My philosophy is really centered around character development, discipline and unity,” Casarella said. “Those are the things I really focus on in my program, and I think it makes the biggest difference at a school like this. You know, the kids, when we teach character it’s all about doing the right things. When we talk about discipline, we make no excuses, we’re accountable for everything we do. And then when it comes to unity, it’s a very family oriented atmosphere here. We really play for each other.”

As part of executing those goals, Casarella has already started having individual meetings with the kids. He said he wants to be close to each player on a level that he knows what’s going on in their lives and what their plans are.

“I want to be an active part of their life. I want to know everything that’s going on with them, I want to help them as much as possible,” Casarella said.

Boulder Creek is nobody’s “stepping-stone” job. It’s a major program with high expectations in the state’s top division. But for Casarella, it’s even more than that.

It’s where he sees himself for the rest of his career.

“It’s been a long time coming and I feel very, very prepared for this. I’m very excited for this,” said Casarella, who also teaches P.E. and health at the school. “I’ve already pledged my allegiance to Boulder Creek here. I told my principal that when I started teaching I wanted to do my full 30 years here at Boulder Creek and I think I’m in a perfect position now to end my career right here. I’ve got 19 years left to go and I just see myself living it out up here and coaching and teaching and just enjoying this community.”