The 2015-16 Phoenix Suns season has not gone according to plan.

Sitting at 14-33, the team hasn’t reached expectations, and since the team’s biggest playmaker, Eric Bledsoe, went down with an ACL tear that will sideline him for the remainder of the season, the team is 2-13.

Things may seem grim for the franchise known for “Seven seconds or less” or the “Round Mound of Rebound”, but there is a bright spot on the season: rookie shooting guard Devin Booker.

The scouting report on the former Kentucky sniper was he can shoot and provide a reliable option for outside scoring. But over halfway through his rookie season, he is proving he can do so much more.

Since Bledsoe went down in late December, Booker has seen his playing time on the floor jump dramatically, and he has taken advantage. In January, he is averaging almost 17 points per game and “Hotline Bling” is a constant on the P.A. system at Talking Stick Resort Arena when “D.B.” finds the basket.

“He has learned to make plays.  When he is involved in a pick-and-roll and comes off, he’s got the size, he can make those extra passes,” Phoenix Suns head coach Jeff Hornacek said. I think that’s where his growth has come.  And his defense is getting better.”

It can sound so simple, but it has fueled Booker’s success since getting more playing time: you don’t have to be perfect, just make plays.

That’s something that took some time to grasp.

“He was trying to make the perfect play, he didn’t want to take any risks. He would come off screens and things that we thought he should shoot, he would look for a better shot,” Phoenix Suns head coach Jeff Hornacek said.

As the #13 pick logs more minutes on the floor, he grows more comfortable and his stats continue to skyrocket.

What has helped Booker, the youngest player in the NBA, with his role at the next level is his experience at Kentucky, where he played on a roster that had four first round draft picks in the 2015 NBA Draft. Hornacek has mentioned Booker’s team first mentality approach as a strength in the young guard’s rookie season.

Being surrounded by that sort of NBA pedigree at the college level helped his learning curve. It also doesn’t hurt that that culture and bluegrass experience is shared with guards Eric Bledsoe, Brandon Knight and Archie Goodwin, three fellow Kentucky Wildcats on the roster.

Whatever it may be, Booker has come ready to play.

“He’s going to score points in this league,” Hornacek said.

“It’s great for us that we can put the ball in somebody else’s hands and maybe make some plays.”

There hasn’t been much doubt that Booker can score the ball, he has double-digit points in each of his last six games, but he continues to get his feet under him defensively.

“Book can score the ball, we all know that,” Suns forward P.J. Tucker said. “But we need him to guard guys and get into guys. I think that will take him to a whole other level.”

Booker’s progression on defense is especially needed after Bledsoe, who Hornacek called the strongest player on both sides of the coutrt, went down with his injury.  But both Tucker and Hornacek mentioned how Booker continues to get more comfortable defensively. In turn, the more strides Booker makes stopping the ball can help him score the ball on the other end.

“When you’re playing hard defensively, I think it does help your offense, you’re into the game,” Hornacek said. “Then when you get on the offense, it seems to flow better.”

And as Booker continues to grow and get stronger, Hornacek hopes the rookie will force opponents to think twice when laying a screen on him.

“We want him to fight over chasing a pick a little harder, run through that screen,” Hornacek said. “Don’t always be the nail, hammer into someone once and let them take the brunt of the blow.”

Booker will continue to expand his game as his rookie year concludes, and he knows the opportunity he has to go up against the league’s best will drive him to improve his game.

“Just playing against their best two-guard every night, I take pride in that. I feel like every night I have something to prove, so that’s what I go out there and try to do.” 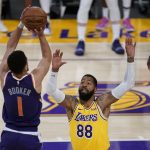 Booker Becomes Superstar Right In Front Of Our Eyes 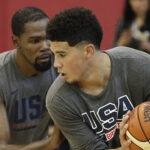